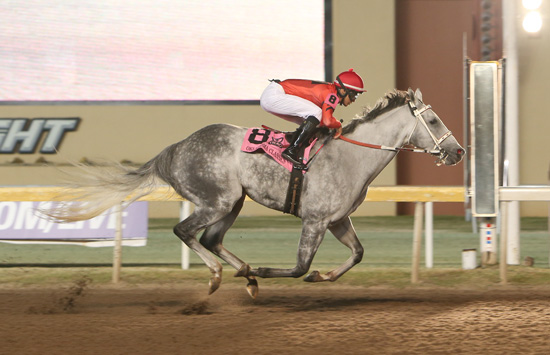 There have been plenty of incredible horses race at Remington Park over 31 years of racing, but none had ever been voted Champion Horse of the Meeting twice, until Welder.

The Remington Park divisional champions were determined by voting from track officials and media who covered the season.

Owner RaMax Farms (Clayton Rash of Claremore, Okla.) and trainer Teri Luneack become the first connections in track history to have a horse become a repeat winner in that category when all ballots came in Thursday. Welder did something that the following legendary horses in Oklahoma could not do – Clever Trevor, Silver Goblin, Highland Ice, Slide Show, No More Hard Times, Silver Icon, Peaked, Brother Brown, Zeeruler, Marked Tree and Evansville Slew. All of these were Horse of the Meeting at Remington Park, but none twice.

Welder, who won four races for the second meet in a row, three of them stakes races this year, also was named Champion in three other categories – Sprinter, Older Male and Oklahoma-bred. He was a unanimous choice in both sprinter and older male categories. It was a near-unanimous decision for Horse of the Meeting and Oklahoma-bred.

“I’m so thrilled for Welder, Clayton and Toni (Rash’s wife) and the whole RaMax team for this accomplishment,” said Luneack. “It’s no easy feat to have all the stars align to make this all happen. He is a superstar. Always will be. I’m just the lucky one that gets to share this life with him. I also want to thank all the Welder fans. I think they love this horse ‘almost’ as much as I do.”

Remington’s two-time leading rider, jockey David Cabrera, was aboard for all four wins at Remington Park this year, as he was last year. Welder was the first horse in track history to win four stakes races in one season, achieving that in 2018.

Welder, a 6-year-old gelded gray son of The Visualiser, out of the Tiznow mare Dance Softly, won an allowance race at six furlongs to open his race meeting here on Aug. 31, then followed that with stakes wins in the $150,000 David M. Vance Sprint (six furlongs) on Sept. 29, the $130,000 Oklahoma Classics Sprint (six furlongs) on Oct. 18 and the Silver Goblin Stakes on Nov. 15. He stretched out to 6-1/2 furlongs in that final stakes race of the season. The Vance Sprint was against open- company foes while the other stakes wins for Welder were against Oklahoma-breds.

Welder broke the track record for six furlongs this year, winning the David M. Vance Sprint in a time of 1:08.13. It was among three total stakes won this year by the streak of gray lightning and seven stakes wins over the past two years. He finished the 2019 meet with 21 wins lifetime from 32 starts and just under $1 million in earnings.

Here’s a look at the Parade of Stars, the champions from Remington Park in 2019:

This colt by the nation’s leading sire, Into Mischief, raced only once at Remington Park for National Hall of Fame trainer Steve Asmussen but he was strong down the stretch of the $400,000 Springboard Mile on closing day. In winning the top Remington Park 2-year-old event, Shoplifted fended off favored Answer In from the Brad Cox barn by a head and Michael Stidham’s charge, Embolden, who was another half-length back in third. Shoplifted, out of the Yes It’s True mare Shopit, had come to the Springboard Mile from the Grade 1, $2 million Breeders’ Cup Juvenile in which he ran seventh. Earlier in the fall, he had shown signs of talent, finishing second in the Grade 1, Hopeful Stakes at Saratoga in upstate New York. Shoplifted earned 10 qualifying points for the 2020 Kentucky Derby in his Springboard victory. He goes into his 3-year-old season with a record of five starts, two wins and one second for a bankroll of $385,500 for owners Grandview Equine, Cheyenne Stables and LNJ Foxwoods of Versailles, Ky. Jockey Ricardo Santana, Jr., rode him in the Springboard.

This filly was three-for-three this meet for the Asmussen Barn and culminated her meet with a win in the $100,000 Trapeze Stakes. The daughter of Pioneerof the Nile, out of the A.P. Indy mare Love and Pride, broke her maiden at Remington Park on Oct. 10 at one mile, then won an allowance-optional claiming race for non-winners of two at that distance on Nov. 21. She is a Kentucky-bred owned and bred by Three Chimney Farms in Midway, Ky. Her racing record after winning the Trapeze is five starts, three wins for $103,553 in earnings. She was a unanimous decision in the voting.

Another that only raced once at Remington Park, but won one of the cornerstone races of the meet – the Grade 3, $400,000 Oklahoma Derby. Owendale scored over rivals that had made a name for themselves on the national scene. Owendale, another son of Into Mischief, out of the Bernardini mare Aspen Light, finished 1-3/4 lengths in front of Sleepy Eyes Todd, who came back to win the $100,000 Jeffrey Hawk Memorial Stakes on closing night. Owendale is owned by Rupp Racing of Bay City, Mich., and trained by Brad Cox. Owendale had previously run third in the second leg of the Triple Crown, beaten only 1-1/4 lengths by War of Will in the Preakness.

This was the closest balloting on the form, but like in her races, Lady Apple prevailed as the winner of the category. She raced only once during the meet, but was the winner of the prestigious Grade 3, $200,000 Remington Park Oaks on Sept. 29. She is trained by Asmussen, ridden by Santana and owned by Phoenix Thoroughbred III and KatieRich Stables of Lexington, Ky. The daughter of two-time National Horse of the Year, Curlin, out of the Clever Trick mare Miss Mary Apples, had come in after winning the Grade 3, $500,000 Fantasy Stakes at Oaklawn in Hot Springs, Ark., and the Grade 3, $300,000 Iowa Oaks.

This Dream Walkin Farms-bred and owned 4-year-old filly won two of three starts with her best win coming in the $130,000 Oklahoma Classics Distaff Sprint on Oct. 18. She is trained by Kenny Smith and was ridden to victory in her stakes win by Alex Birzer. She is a daughter of Euroears, out of the Cactus Ridge mare Carter’s Chord.

This 3-year-old filly, trained by Randy Oberlander and ridden by Iram Diego, raced six times this meet, winning three times, running second once and third another two times. She never finished out of the money this season. She is a daughter of Alternation, out of the Evansville Slew mare Imadancingslew. She finished the season with two turf wins among stakes-company, taking the $130,000 Oklahoma Classics Distaff Turf on Oct. 18 and the $70,000 Bob Barry Memorial Stakes on Sept. 27. She is owned by W. Mike Jones of Bristow, Okla.

This category was strongly contested, with just a few votes separating the winner, Moonlight Train, from Mr. Tickle. Moonlight Train, a 5-year-old mare trained by Karl Broberg and ridden to victory by three different jockeys, was four-for-four this race meet, winning her claiming races for tags of $5,000; $7,500 and $10,000. She was claimed in each of those starts. Her winning jockeys this meet were Cabrera, Richard Eramia and Lane Luzzi. Cabrera won with her twice. This daughter of Wilburn, out of the Eurosilver mare The Ice Train, also won a race on Oklahoma Classics Day. She was sent to post on Dec. 5, her final race this meet, by owner-trainer Robert R. Mitzner of Abbyville, Ks.