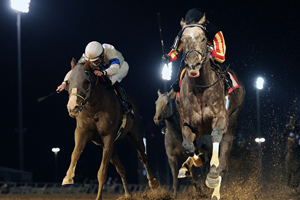 The $100,000 Maxxam Gold Cup has attracted nationally prominent horses since its first running in 1994, and the 2013 renewal included multiple stakes winners and two horses that had run in the Grade 1, Kentucky Derby and Belmont Stakes. It was Unstoppable U who showed his class and maturity in capturing the mile and one-eighth feature.

The 4-year-old son of Exchange Rate won his first two career starts last year at Aqueduct before running sixth in the Belmont Stakes. Trained by Kenneth McPeek for owners Magdalena Racing and Mojallali Stables Inc, he began his 2013 campaign at Oaklawn Park and shipped into Sam Houston fresh off an allowance score on February 9.

“He’s acted like a good horse from the beginning,” said McPeek. “He had some breathing issues as a 3-year-old. That’s why he didn’t run well in the Dwyer. He’s maturing and this was a good test for him. We’ll look for a Grade 3 for his next start.”

With confident handling by jockey Chris Landeros, the Kentucky-bred sat off the early pacesetter Hurricane Ike, who posted fractions of :23.88 for the first quarter-mile and :48.48 for the half mile. At the top of the stretch, Landeros took command and drew to the lead, drawing off in a final time of 1:50.96 over a fast main track.

“I would like to say thank you to Mr. McPeek and the owner,” said Landeros. “They had him ready to go; I just had to hang on. I didn’t have to push him, but wanted to get on Hurricane Ike’s hip. I knew he was the horse to beat.”

McPeek was here in 2002 to saddle the incomparable Take Charge Lady in the $275,000 NTRA Great State Challenge Distaff.

“I’ve had a bit of luck over the years,” said McPeek. “I need to come back more often, I suppose.”

Trainer Michael Stidham finished second and third in the Maxxam with Dreaming Blue ridden by Paul Nolan and Hurricane Ike, who was sent off as the post-time favorite.

“Everything went well for him,” said rider Hurricane Ike’s rider, James Graham. “Then they came and got him.”

Unstoppable U returned $15.80 as the fifth betting choice in the eight horse field.

Departing Remains Undefeated With His Victory in the $50,000 Heritage Stakes
Trainer Al Stall Jr. knew he had a talented colt in his barn with the undefeated Departing. Owned and bred by Claiborne Farm and Adele B. Dilschneider, the War Chant colt won both of his starts at Fair Grounds and ably won his stakes debut this evening at Sam Houston Race Park in the $50,000 Texas Heritage Stakes.

Rider Brian Hernandez Jr. kept his mount in a tracking position as Seeking Payday went to the lead.

“I was happy to follow the six horse and give him a target,” said Hernandez. “He did it in hand.”

“We’re in a good spot,” stated his trainer. “They send nice horses to us year in and year out. He’s a good horse and has everything put together. We know he has talent and will just see how far he can go.

Stall indicated that Departing will likely be pointed to the Louisiana Derby at Fair Grounds in 28 days.

Departing returned $3.20 as the even-money favorite. Holiday Mischief was a game second, followed by Texas-bred Worldventurer, who had won two previous stakes this season at Sam Houston Race Park.

Bred and owned by Kenneth and Sarah Ramsey and trained by Michael Maker, the talented mare won her fifth career race, returning to the winner’s circle for the first time since July 14 at Ellis Park.

“I love coming here to ride on the turf; this is a great course,” said Napravnik. “This filly had a great stalking trip on the outside; she was much the best.”

“It was nice to see her get a good trip today,” said Joe Sharpe, assistant to Maker. “She was very unlucky last year.”

Flashpoint Impressive in the $50,000 Sam Houston Sprint Cup
Flashpoint took on some of the nation’s top 3-year-olds in 2011, competing in the Florida Derby and Preakness Stakes for trainer Steve Asmussen. Rider Glen Murphy had the call on the 5-year-old son of Pomeroy for Peachtree Stable. This was the fifth win from 11 starts for the Florida-bred, who covered six furlongs in 1:10.21.

“He’s a big horse and left the gates well, said Murphy. “He’s a tough horse to work in the morning, but put it together tonight.”

Trainer Larry Jones had a memorable night at Sam Houston Race Park on January 26, winning and setting two track records with Joyful Victory and Icon Ike. This evening, Hamiltonian, a 4-year-old son of Bellamy Road, set the pace, but had to settle for second.

Flashpoint, sent off as the third-betting choice, returned $10.40 for the win, and earned $30,000 for the victory. Bind was third.

Sam Houston Race Park Makes Adjustment in Race Dates for Final Two Weeks of Thoroughbred Meet
Sam Houston Race Park requested and received a change of live Thoroughbred racing dates in March. In a letter to the Texas Racing Commission (TRC), officials requested that the Sunday, March 10 and March 17 live dates be moved to Monday, March 11 and March 18. Since the beginning of the 2013 Thoroughbred racing season on January 18, Monday’s handle has outperformed Sunday. The Thoroughbred meet will continue through March 18 followed by the 2013 live American Quarter Horse season, which gets underway on Thursday, March 28.