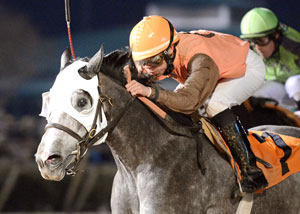 Sam Houston Race Park will host two stakes for Texas-sired horses on Saturday, February 16. The $75,000 Jim’s Orbit and the $75,000 Two Altazano are races supported by the Texas Thoroughbred Association (TTA) for progeny of nominated Texas stallions. They are part of the Texas Stallion Stakes Series.

The draw took place on Wednesday, February 13 for both stakes, which will each be contested at one mile on the main track.

The $75,000 Two Altazano Stakes will feature a field of six fillies, including Platinum Song, the winner of the $50,000 Bara Lass Stakes, which took place on January 18 as part of Texas Champions Weekend at Sam Houston Race Park. She is one of three fillies in the race bred by Clarence Scharbaurer Jr., who continues to be one of the most prominent breeders in the Lone Star State. Platinum Song, a daughter of Scharbauer’s Valor Farm stallion My Golden Song, is owned by Scott Brown and trained by Danny Pish. She will be ridden on Saturday evening by Gerardo Mora.

The field also includes Tastefullyxcessive (by Valor Farm stallion Early Flyer), owned by Scharbaurer and trained by Bret Calhoun; Bearbottom (by C’Mon Tiger), who will run for her breeder and owner Tom Durant and trainer Jack Bruner, and two fillies conditioned by Steve Asmussen: Esscalator (by Asmussen Horse Center stallion Intimidator) and Makeshift (by Lane’s End Texas stallion Too Much Bling). Esscalator won the Texas Stallion Stakes at Retama Park on December 8 for owner Connie Scherr and Makeshift, owned and bred by Will S. Farish, broke her maiden impressively last month at Sam Houston and makes her stakes debut in the Two Altazano.

The sixth entrant in the stakes is My Golden Belle (by My Golden Song), owned by Kathy L. Stephens and trained by Dewey Smith. She is the third of the Scharbauer homebreds and will make her first start since the Texas Stallion Stakes at Retama Park, where she finished fourth.

“Leaving the gate, she pulled a front shoe,” said Smith.  “She ran a good race, considering everything.”

Smith might be familiar to Sam Houston Race Park fans as a Quarter Horse jockey before becoming an assistant trainer to Ralph Arnold two years ago. Sadly, Arnold passed away on New Year’s Eve, but Stephens wanted his racing operation in Texas to continue. She named Smith as her trainer and he is very grateful for the opportunity.

“Ralph and Kathy have been real good to me,” stated Smith. “I think this filly will love going long, and hope she runs a good race on Saturday.”

Smith will give rider Paul Nolan a leg up in the Two Altazano, and will have Arnold in his thoughts as he saddles his first stakes entrant.

“As much as I would love to win the race, it will be tough going into the winner’s circle without Ralph,” admits Smith.

Seven colts and geldings will compete in the Jim’s Orbit with Worldventurer holding the experience edge over his rivals. The son of Valor Farm stallion Wimbledon is owned by Wesley Melcher and won the $50,000 Groovy Stakes on opening weekend, drawing off by four-lengths under jockey Cliff Berry. Berry has the return call for Bret Calhoun and will be making his tenth career start on Saturday evening.

Asmussen sends out Breathethefire (by Lane’s End Texas stallion Valid Expectations), who ran second in the Groovy Stakes for Littlebrother Farm LLC; and Pop Chart (by Too Much Bling), who ran third in the Groovy Stakes for Farish. Several lightly-raced colts will try to spring the upset including Absotively (by Silent Picture), who will make just his second start for trainer Danny Pish; Meme Jo (by Too Much Bling), winner of a maiden special weight on January 19 for trainer Karl Broberg and Ivan Fallunovalot, a son of leading Texas sire Valid Expectations, who won his career debut in a six-length romp on February 2 for Tom Durant and Jack Bruner.

There will also be a silent auction to benefit The Texas Thoroughbred Educational Fund or The Paddock Foundation. The current list of auction items includes a wide variety of books, a beautiful leather headstall and bit, a stuffed UT Longhorn Mascot, an A&M teddy bear, a TTA logo cap autographed by Pat Day, a full-page advertisement in Southern Racehorse, handmade jewelry, framed artwork and more.

Glen Murphy continues to maintain the lead in the rider standings at Sam Houston Race Park. The 44-year-old jockey has made 23 trips to the winner’s circle. Gerardo Mora, who was top rider in the Retama Park fall Thoroughbred racing season, is second with 16 wins. He picked up his second stakes of the season on Saturday evening when he guided Manyriverstocross to victory in the $50,000 Tomball Stakes.  Chris Landeros is in third place with 11 wins and  Roman Chapa is fourth in the standings with 9 victories.

Danny Pish has saddled 12 winners to take over the lead in the trainer standings following four weeks of live racing. There is a three-way tie for second between Steve Asmussen, Brent Davidson and Jack Bruner. Each have 8 victories. Karl Broberg follows with seven wins and Bret Calhoun, who has won four stakes this meet, has with five first-place finishes.

Student Council is owned by Millennium Farms and trained by Neil Howard. Retired in 2008, The bay son of Kingmambo was bred by Will S. Farish and amassed career earnings of $1.6 million. His most lucrative title was the Grade 1, Pacific Classic at Del Mar in 2007.

The mile and one-eighth Maxxam Gold Cup will be run on Saturday, March 2. Nominations close on Wednesday, February 20.