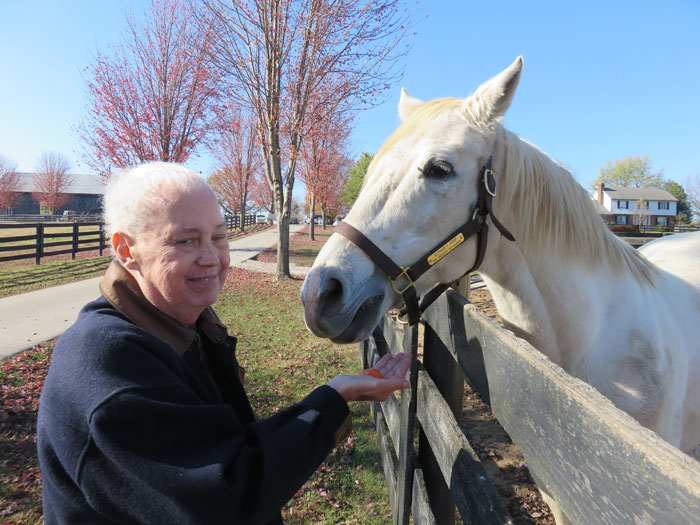 William P. (Bill) Mooney, the award-winning turf writer who ranked among Thoroughbred racing’s premier historians of any generation, died peacefully at his Lexington home Jan. 28 after a devastating two-year battle with renal cell carcinoma. He was 69.

Bill was a friend and mentor to many, offering his wise counsel to both aspiring and veteran journalists and also to cancer patients. In his last months, he showed us not only how to live but how to die with courage and grace.

Lexington Mayor Jim Gray and the Kentucky Senate in December recognized Bill for his contributions to the horse industry and valor in confronting the cancer he knew would kill him.

The Senate proclamation on the motion of Sen. Reggie Thomas read in part that Mooney “has worked tirelessly to preserve for posterity horse racing’s illustrious history, using details and descriptions which, for the reader, bring to life the colorful world of horse racing, both today and throughout history.”

Mayor Gray declared December “Bill Mooney Month in Lexington,” the proclamation stating in part that Bill “is a kind, loving person who goes out of his way to help others in need; who has been a role model for journalists; and who has taught us all how to face overwhelming adversity with great strength, courage, grit and class; and … has made incredible contributions to horse racing that will last in perpetuity.”

Bill was known for his relentless pursuit of accuracy, painstaking research and terrific storytelling during his work for The Thoroughbred Record, The Thoroughbred Times and The Blood-Horse. He had been a frequent contributor to The New York Times and numerous magazines.

Bill was a two-time Eclipse Award winner, in 1985 for the quintessential story about Ellis Park that ran in Thoroughbred Record and in 2007 for a poignant story about the euthanization of champion Precisionist at Old Friends Thoroughbred Retirement Farm in Georgetown, Ky., that ran in Post Time USA. The native New Englander was awarded the 2012 Walter Haight Award by the NTWAB for career excellence, co-authored multiple editions of The Complete Encyclopedia of Horse Racing: The Illustrated Guide to the World of the Thoroughbred and is author of the Tony Ryan Book Award-winning Keeneland’s Ted Bassett: My Life. He also served as a racetrack publicist of note, including for years for Mountaineer Park and the West Virginia Derby.

For The Texas Thoroughbred magazine, Bill wrote an extensive and meticulously researched series on “The Forgotten History of Texas Racing.” The articles covered the Texas tracks of the 1930s, including Arlington Downs and Fair Park in the Dallas/Fort Worth area, Alamo Downs in San Antonio and Epsom Downs in Houston. If not for Bill’s efforts to tell the stories of those tracks and the horsemen of that era, far less would be known about the history of horse racing in the state.

In 2015, the National Turf Writers and Broadcasters created and named Bill the inaugural recipient of the Bill Mooney Courage Award for displaying courage in the face of tremendous adversity. Bill said one of his regrets about his illness was that he was unable to research and write a story about a long ago racetrack in Charleston, S.C., where four Kentucky Derby winners raced.

Bill’s magnificent and voluminous history and story-telling were typed with one finger, a byproduct of being in a horrific auto crash at age 15. During his six-week hospital stay, his passion for horse racing was kindled by an orderly who was a fan and would bring him the race charts from the Providence Journal. Bill received an undergraduate degree from North Texas State and his Masters and PhD in English at Michigan State. Somehow he became a huge White Sox fan who also tolerated the Cubs.

Bill was preceded in death by his parents, noted circus performers James P. Mooney Jr. and Maria Anna Antalek, and a brother Jim. He is survived by another brother, John. He loved Brittany Kovacs and Zack Sharp, who called him Uncle Bill, as if they were his children. Bill treasured all the visits, phone calls and emails in his final months from his friends and writing and racing colleagues. Friend of 45 years and former grad-school roommate Dr. Thomas Tobin, Mary and Mark Simon, Alicia and John Hughes and neighbor Barbara White provided an unending source of comfort. Bill immensely appreciated the loving care provided by Duchess Campbell Peach, his caregiver who became a friend.

Cremation was chosen, with Clark Legacy Center in Nicholasville handling arrangements. There will be a celebration of Bill’s life at 5:30 p.m. ET on Feb. 18 at The Thoroughbred Club of America, 3555 Rice Road at the intersection with Versailles Road in Lexington. Memorial gifts: Hospice of the Bluegrass, 2312 Alexandria Dr, Lexington, KY, 40504, and Old Friends Equine, 1841 Paynes Depot Rd., Georgetown, KY, 40324, where founder and close friend Michael Blowen is naming a road for Bill.

Bill insisted there be no moments of silence in his memory, telling Alicia Hughes that if people feel so compelled, “have a moment of noise.”