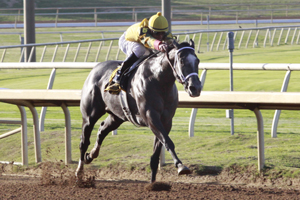 Victoria Ashford’s Triumph and Song made a smooth transition from allowance to stakes company in the $50,000 Premiere Stakes for Texas-breds on April 11, opening day of the Lone Star Park meet. The 4-year-old gelded son of Valor Farm stallion My Golden Song scored an easy wire-to-wire victory by 4 ¼ lengths and ran 6 ½ furlongs in a blistering 1:15.45 as the 3-10 favorite. Jamie Theriot rode for trainer Bret Calhoun, who indicated the Texas-bred would next head to Kentucky to take on stakes company there.

Bred by Ashford and Dr. Troy Carmichael, Triumph and Song is out of the Hadif mare Coryphee. Although Coryphee only faced the starter five times in her career, the daughter of another Valor Farm stallion won twice with a second and third for earnings of $42,080.

Prior to winning his stakes debut in the Premiere, Triumph and Song had won two allowance/optional claiming races at Fair Grounds and is now a perfect three-for-three on the year. All told, the gelding has a record of 8-5-1-2 with a bankroll of $120,116. Triumph and Song is one of five stakes winner sired by My Golden Song, who recently surpassed $1 million in progeny earnings from his first two crops to race.