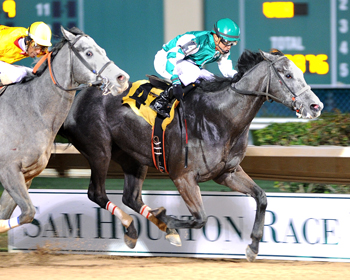 Saturday’s feature at Sam Houston Race Park was the $50,000 Sam Houston Sprint Cup Stakes, and it was another spectacular effort for the talented Texas-bred, Triumph and Song, who racked up his third stakes win of the 2014 Thoroughbred racing season.

Jockey Junior Chacaltana has ridden the 5-year-old son of leading 2013 Texas stakes sire My Golden Song of Valor Farm in each of his three appearances, and this was his fastest clocking to date. Breaking from post position four, he took the lead, setting fractions of :22.03; :44.32; :56.42 and crossing the wire of the six-furlong sprint in a quick 1:09.39.

“This is one of the best horses I have ever ridden,” said Chacaltana. “He’s fast, got a lot of heart and never quits. Our plan was to send him; that’s the horse’s style and we don’t want to change it.”

Trainer Karl Broberg claimed Triumph and Song for $40,000 at Fair Grounds Race Course for owners H & H Ranch. The grey gelding made his first appearance in the $50,000 Spirit of Texas Stakes here on January 18, and followed that with a turf win in the $50,000 Bucharest Stakes, just three weeks later. The Spirit of Texas and Bucharest were for Texas-breds, and the Sprint Cup was for open company.

Triumph and Song was sent off as the 2-5 choice in the five horse field with the scratch of multiple stakes winner Heitai. Triumph and Song has earned $90,000 in his last three starts, and with his allowance/optional claiming victory on December 29 at Fair Grounds, has a four-race win streak intact.

“Three stakes in a row is so incredible,” said owner Carolyn Hanek who spoke on behalf of the ownership group. “It was a wonderful claim and we love coming to Sam Houston Race Park.”

Bred by Victoria Ashford and Dr. Troy Carmichael out of the Hadif mare Coryphee, Triumph and Song now has a record of 16-9-2-2 with earnings of $250,556.

“It was close,” said Parker. “I thought we had it, but the winner is a nice horse.”

Texas-bred Solar Charge, has had the tough task of facing Triumph and Song in each of the three stakes, and had to settle for third under jockey Lindey Wade. The 7-year-old Authenticate gelding, who has a career record of 47-14-10-9 with earnings of $387,109, runs for Carolyn Barnett and David and Lana Alford. Ellen Williams trains the veteran.