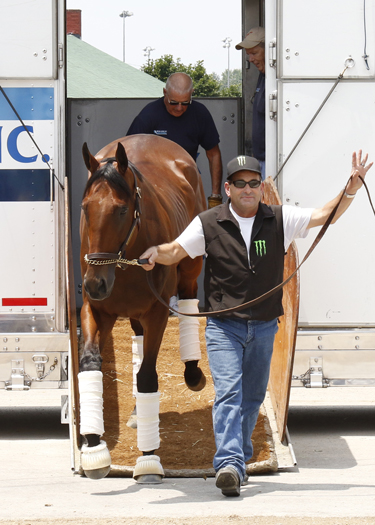 Fewer than 24 hours after his tour de force triumph in the Belmont Stakes that made him racing’s first Triple Crown winner since 1978, Zayat Stables LLC’s American Pharoah is back at Churchill Downs and resting in his familiar stall at Barn 33.

The winner of the Kentucky Derby Presented by Yum! Brands (Grade I), the Preakness (GI) and Belmont Stakes (GI) will get a few days rest – along with plenty of treats and good wishes from visitors – following his 5 ½-length victory in Saturday’s Belmont Stakes. That victory placed American Pharoah in the company of 11 other 3-year-old Thoroughbreds who previously captured the coveted three-race series of American classic races.

A large group of admirers and media members had gathered outside trainer Bob Baffert’s barn to greet the Kentucky Derby and Triple Crown winner, and the entire group broke into applause when a van carrying their hero arrived on the Churchill Downs backside. Assistant trainer Jimmy Barnes led the 3-year-old son of Pioneerof The Nile off the van around 1:15 p.m. (all times EDT).

“I went into this whole thing fairly confident,” Barnes said of the Triple Crown after giving American Pharoah a post-flight bath. “I knew he just needed to get a decent break, come out of the gate and get a fair chance to win it, and that’s absolutely what happened.”

When the flight carrying American Pharoah arrived at Louisville International Airport, the Triple Crown winner and Baffert’s stable pony Smokey were provided a police escort during their brief van ride from the airport to the Baffert barn. Along the way fans had gathered on porches alongside roadways near the track to cheer and wave to racing’s new hero.

“The feelings just go on and on; they just don’t stop,” Barnes said of his experience following American Pharoah’s Belmont Stakes victory. “Just coming here with the police escort and there were fans on the street waving – it’s a lot of roller-coaster emotions.”

Barnes said a near-constant stream of visitors and well-wishers had visited America’s newest Triple Crown winner since Saturday’s triumph at Belmont Park. He joked that the horse had gotten less sleep since the race than he had, but he added that American Pharoah has handled the post-race celebration as well as any aspect of his historic Triple Crown run.

“He probably had about two bags of carrots (since the race), along with his normal feed,” Barnes said. “But he came back good. He’s happy.”

Baffert’s colt will get some rest following his busy spring and a trio of Triple Crown wins in the Kentucky Derby, Preakness and Belmont Stakes that extended his ongoing win streak to seven races. But he probably will not be away from the track for long.

“For the next four days he’ll be walking and then we re-evaluate the horse, see where he’s at and if Bob’s ready to go back to the track with him,” Barnes said. “Seeing how he came out of the race, I would think he would go right back to the track.”

The Stephen Foster Handicap schedule also will include the annual presentation of engraved trophies earned by the Kentucky Derby’s winning owner, trainer, jockey and breeder.

Owner Ahmed Zayat also bred American Pharoah, so he will receive both the solid gold winner’s trophy and the smaller sterling silver replica that goes to the winning breeders. Winning jockey Victor Espinoza plans to be at Churchill Downs to personally accept his trophy. Plans for the four-time Kentucky Derby winner Baffert have not been finalized.

The Stephen Foster Handicap will be televised live by NBCSN. Saturday’s first race will be 6 p.m.