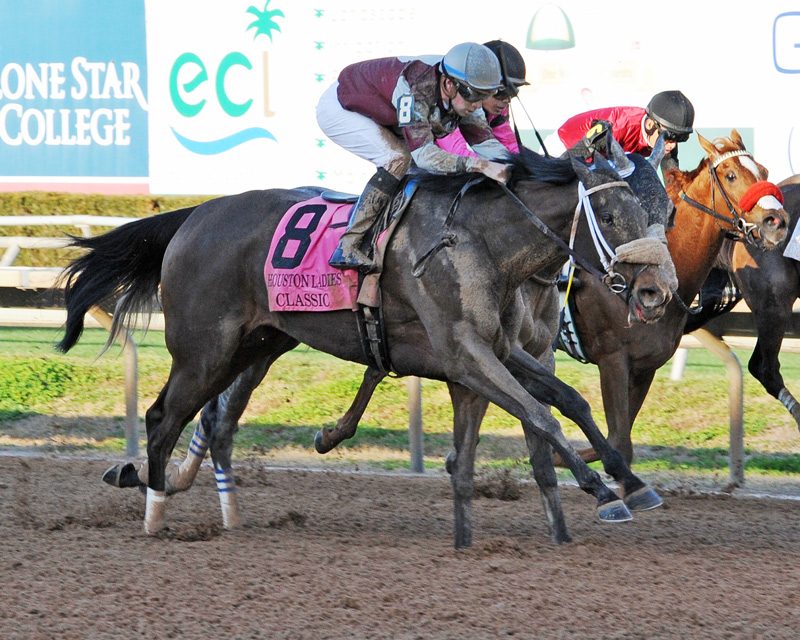 It was a tremendous afternoon of racing on Sunday at Sam Houston Race Park with thrilling performances by Tiger Moth in the Grade 3, $400,000 Houston Ladies Classic and another win for trainer Mike Maker in the Grade 3, $200,000 Connally Turf Cup.

It was also an exceptional day for jockey Jose Ortiz, who posted two stakes wins on the afternoon card, and was warmly greeted by the fans following his Eclipse Award on Thursday night.

In its sixth running, the Houston Ladies Classic’s previous winners include Joyful Victory, Cassatt, Unbridled Mo and Forever Unbridled, the 2016 champion, who was honored as Older Female champion in Thursday’s Eclipse Awards at Gulfstream Park.

Tiger Moth, trained by Brad Cox, signaled that she is a filly with a glorious future ahead based on her performance today. Bred and owned by John D. Gunther the 6-year-old mare by Street Sense has tested tough waters at Churchill Downs, Oaklawn Park and Keeneland, winning six of her 21 starts.

Jockey Florent Geroux guided the dark bay mare from the far outside post, which is her preferred post position, tracking behind the pacesetters and rallying outside. She finished in 1:46.01, a neck ahead of Actress, who was sent off at odds of 3-2.

“I called Florent this morning to make sure he would get her to the outside,” said Cox. “That’s how she likes to run. She continues to be a very nice filly for Mr. Gunther.”

“She likes to have horses in front of her, and always finishes strong,” Geroux. “I’m very happy for Brad; he has been a good friend for a long time.”

Assistant trainer Ricky Giannini made the trip to Houston to saddle Tiger Moth.

“She won a grade 3 at Ellis,” said Giannani. “Granted, it wasn’t against the same company, but she’s always had it in her. She got the right trip and proved she can run against good fillies.”

Jose Ortiz rode the runner-up for owners Gary and Mary West, who received $80,000 for her effort.

“I was wide, but the winner passed me on the outside, so I have no excuses,” he said.

Tiger Moth, sent off at 17-1, rewarded her supporters with a win payout of $36.60. She earned $240,000 for the victory, increasing her lifetime bankroll to $642,107. Martini Glass, ridden by Paco Lopez, ran third followed by Sandy’s Surprise, Ready to Confess, Valadorna, Adore and Promise of Spring.

The first running of the Houston Ladies Classic in 2013 was formed to serve as the marquee race for Sam Houston Race Park’s Thoroughbred racing season. It was awarded its graded status by the American Graded Stakes Committee in December, 2015 and remains the richest Thoroughbred race in Texas. The Houston Ladies Classic will be the first stakes of the Penn Gaming Racing Challenge. Now in its fifth year, it will incorporate over 20 stakes races in 2018 worth over $5.5 million.

Bigger Picture Defends His Title in the Grade 3, $200,000 John B. Connally Turf Cup
Bigger Picture owned by Three Diamonds Farm, successfully defended his title, rallying from off the pace under Jose Ortiz in the mile and one-half turf feature. Trained by Mike Maker, the Connally was on their radar since his disappointing finish in the Breeders’ Cup Turf at Del Mar.

“He was doing so well heading into the Breeders’ Cup, but had a reaction to something a couple of days before the race,” said Maker. “We were disappointed, but knew he liked the turf course here last year so we figured we’d bring him back.”

Ortiz patiently guided the chestnut gelding through the first quarter mile in :24.41 and the half-mile in :49.94. He picked up the tempo at the top of the stretch, driving to the wire in a final time of 2:31.13 over a firm turf course. He returned $3.80 as the odds-on choice.

Bred by Kenneth and Sarah Ramsey, Bigger Picture has won 11 of his 29 starts and eclipsed the million-dollar earnings mark with today’s purse of $120,000.

Trainer Michael Maker has now won six of the last seven editions of the Connally with Papa Bodie in 2012; Admiral Kitten in 2014; Coalport in 2015; Da Big Hoss and two running swith Bigger Picture.

Strong Closing Kick Does the Job for Hogy in the $75,000 Frontier Utilities Turf Sprint
Trainer Mike Maker won the 2017 edition of the $75,000 Frontier Utilities Turf Sprint with Partly Mocha and captured this year’s race with a well-traveled and very popular turf specialist: Hogy owned by Michael M Hui. The 9-year-old son of Offlee Wild picked up his 18th career win under a confident ride from Ortiz as the even-money choice in the 11 horse field.

Ortiz sat off the pace and was content to be in fifth-place at the 3/8ths pole and begin picking off winners in the final stage of the race.”

I was where I wanted to be in the race, said Ortiz. “When I got him clear, he did what we knew he could do.”

He unleashed his kick, crossing the wire of the five-furlong turf event in :58.20, two and one-quarter lengths ahead of American Sailor. Owned by Raj Jaganan the 6-year-old sired by City Zip won the 2016 Bucharest Turf Sprint at Sam Houston while in the barn of Joe Sharp. Trainer Wayne Potts now trains the chestnut gelding who shipped in from Tampa Bay Downs and was ridden by Lane Luzzi. Medal of Courage was third and Wings Locked Up ran fourth.