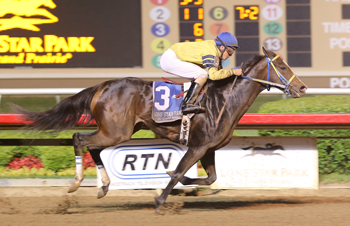 The Texas Stallion Stakes were recently renamed to honor Scharbauer, so it was fitting that the winner of the Got Koko division for fillies was bred in the Lone Star State by the Texas icon. Thegirlinthatsong, owned by Anjo Racing Inc. and trained by Andrew Konkoly, defeated favorite Scooter’s Choice by 4 ½ lengths with a one-mile clocking in 1:38.53. Thegirlinthatsong’s sire, My Golden Song, stands at the late Scharbauer’s Valor Farm near Pilot Point, Texas.

Scooter’s Choice at odds of 3-5, had the lead from the start, was taken in hand early and set the pace. She was then asked at the quarter-mile marker and went under the whip near the sixteenth-pole but was no match for a fast closing Thegirlinthatsong, who took the lead approaching the sixteenth-pole drawing away under a hand ride.

“She’s an honest filly, she tries hard, she’s very relaxed and when you ask her to run, she runs,” said Konkoly.

Ridden to the victory tonight by apprentice David Cabrera, Thegirlinthatsong increased her career earnings to $160,020. This was her fourth win from 12 starts. She is now a two-time stakes winner after taking the $100,000 Happy Ticket Stakes against open company on the turf at Louisiana Downs last year. Thegirlinthatsong returned $15.80, $5.00 and $3.60.

Wayne Sanders and Larry Hirsch’s Scooter’s Choice, a filly by Lane’s End Texas stallion Too Much Bling who won the Bara Lass Stakes at Sam Houston Race Park earlier in the year, held on for second. W.S. Farish’s homebred Paddle Out, by Texas’ all-time leading stallion Valid Expectations, took third. Forever Since, Swifterthantaylor and Pretty N Fast Too completed the order of finish.

In the 11th running of the Stymie division for colts and geldings, favorite Ibaka won impressively. Guided by 2013’s leading rider Lindey Wade, he raced just behind the leader (Internet Success) on the outside prompting the pace, drew even near the half-mile marker, vied on the outside in the far turn before edging clear in upper stretch to prove three lengths better than the rest under a strong drive.

Bred and owned by Doug Wall and trained by Bret Calhoun, Ibaka is an Oklahoma-bred gelding by Uncle Abbie, who stands at Joe Kerby’s Key Ranch near Salado, Texas. Ibaka won two stakes during the Sam Houston Race Park meet, the Texas Heritage Stakes against open company and the Jim’s Orbit division of the Texas Stallion Stakes. He is a perfect four-for-four this year, and overall has won five of seven starts with earnings of $162,036.

“This colt is just class,” said Wade. “Today he showed versatility. He relaxed off the pace and around the first turn, I felt like they were going to have trouble beating me. He really came off the bit and relaxed well.”

Additional Notes: Trainer Karl Broberg had his second four-win night of the week tonight. He also had four wins last Thursday. He is on top of the standings with 29 wins through 17 days of racing this meet.

Trainer Danny Pish is only three wins away from his 500th Lone Star Park win. He has two entered on Sunday’s card.