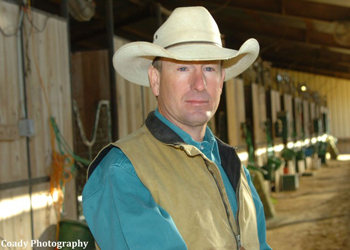 By Martha Claussen
On Friday afternoon, top Texas Thoroughbred trainer Danny Pish will saddle his first Breeders’ Cup runner with Got Shades in the Grade 1, $1,000,000 Breeders’ Cup Juvenile Turf, the seventh race on the card.

Owned by Dennis Foster, Got Shades has closed in his last two stakes victories, the Sunny’s Halo and Sunday Silence, both on the Louisiana Downs turf course. He was shipped to Santa Anita where he ran third in the Zuma Beach on October 6. That effort was the confirmation that Pish and Foster were seeking to take the next step to the Breeders’ Cup. The 2-year-old son of Pollard’s Vision was ridden in Louisiana by Roman Chapa, but gets the riding services of the resurgent Gary Stevens on Friday afternoon. Got Shades started his career at Lone Star Park, where he ran third against maiden company.

“Gary breezed him on Saturday (October 26) and it was a good solid work,” reported Pish.

Pish has remained at Santa Anita with Got Shades, maintaining constant cell phone contact with his assistants at Retama Park and Louisiana Downs. With shedrows of 60 or more horses at Retama, Sam Houston and Lone Star during their Thoroughbred meets, Pish admits that overseeing the care of just one horse is not his standard operating procedure.

“Being here with just one horse is a little strange to me,” said Pish, who has been aboard for the majority of his morning works. “I’m not as good as my crew at cleaning stalls, that’s for sure, but I have enjoyed the one-on-one time with the colt.”

Got Shades topped the $100,000 earnings mark with his third-place finish in the Zuma Beach Stakes at Santa Anita. The dark bay colt has won two of his four career starts and will break from post position 3 under Stevens at odds of 30-1. The morning line choice for the Juvenile Turf is Kenneth and Sarah Ramsey’s Bobby’s Kitten, winner of the Grade 3 Pilgrim Stakes at Belmont Park.

Got Shades will be overlooked by the betting public, but Pish, who has saddled 1,682 winners since he began training in 1995, believes in his horse.

“He’s got the classic turf running style,” said Pish, who will be joined by his wife, Sabina, and son, Joe Dan, on Friday. “He’s done everything we have asked so far. It is pretty exciting to have a Breeders’ Cup starter.”