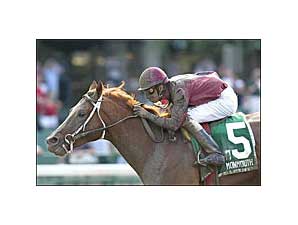 Texas stallion Evil Minister, perhaps getting ready to celebrate Halloween, started this month with a bang as he sired his second winner on October 2 when Uptown Justice won a maiden event at Hoosier Park in Indiana, and then three days later at the same track his son Dread the Pirate easily captured the $89,150 Crown Ambassador Stakes for Indiana-breds to become his first stakes winner. The 2-year-old colt broke his maiden against special weight company in August and has a record of 3-2-0-1 with earnings of $74,254.

Evil Minister, who stands at Eddie George Ranch in Briscoe, Texas, is a son of prolific stallion Deputy Minister out of the Grade 3-winning Piccolino mare Evil’s Pic. On the track, Evil Minister won the Sapling Stakes (G3) at Monmouth Park and finished third in the Futurity Stakes (G2) at Belmont Park.