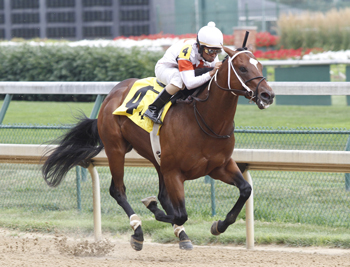 Texans Bill and Corinne Heiligbrodt’s Cinco Charlie set a pressured pace and shook off a challenge by Texas-bred Silverhill in deep stretch to edge clear for a 1 ¾-length victory in Saturday’s 113th running of the $108,100 Bashford Manor (G3) at Churchill Downs.

Ridden by Shaun Bridgmohan, Cinco Charlie ran six furlongs over a fast track in 1:10.36 to give the meet’s leading trainer Steve Asmussen his fifth win in the stakes event that is annually the year’s first open graded stakes race for 2-year-olds in North America. The victory came 24 minutes after Asmussen’s stable star Untapable, the Longines Kentucky Oaks (G1) winner, won the $294,000 Mother Goose (GI) at Belmont Park by 9 ¼ lengths.

Cinco Charlie broke fastest of all from post four and led the field of six juveniles through fractions of :21.89, :45.69 and :57.63 with Texas invader Silverhill in close pursuit from his outside. Cinco Charlie proved best in the final yards and banked $67,022 to boost his earnings to $93,422 from two wins in two starts.

“He’s pretty precocious, a nice 2-year-old and he makes my job easy,” Bridgmohan said. “It was pretty straightforward. He broke smartly and was comfortable the whole way. When I asked him to pick it up he accelerated and did everything profession.”

Prior to the Bashford Manor, Kentucky-bred Cinco Charlie created a favorable impression May 9 when he debuted in the first 2-year-old race of the meet as the 3-2 favorite against seven rivals and won by 2 ¾ lengths. The Indian Charlie colt, a $190,000 purchase at the OBS March sale, clocked 4 ½ furlongs in :51.65, which remains the fastest of six 4 ½-furlong races this meeting at Churchill Downs.

“It was pretty much unbelievable to go all the way today coming off of one race seven weeks ago,” Bill Heiligbordt said. “It’s pretty impressive to win back like that and get a horse to go from 4 ½ furlongs to six furlongs over a period of time, so he’s got to be a nice horse.”

The stakes triumph was the first for the Heiligbrodts following a brief hiatus from the ownership ranks that included the dispersal of their vast racing operation in the summer of 2011. Previously, the Texans were among the nation’s top owners for more than two decades and had more than 150 horses in training. At the time of the dispersal they had owned all or part of 118 stakes-winners, including 45 graded stakes-winners.

“I found a good horse,” Bill Heiligbrodt said. “That’s why I’m back. I have just a couple of horses in training (five) but I’m looking for some more good horses. I’m just being careful and trying to buy a little better horse and not have as many.”

Cinco Charlie, named after 73-year-old Bill Heiligbrodt’s boat, is a bay Kentucky-bred out of the Marquetry mare Ten Halos.

“I had Bwana Charlie who was probably one of the best racehorses I had and this horse is a three-quarter brother (note: his dam Ten Halos is a sister to Bwana Charlie). And he’s a very pretty horse.”

Silverhill, owned by Douglas Scharbauer and bred by his late father Clarence Scharbauer Jr., earned $21,620 for running second. The Bret Calhoun trained gelding broke his maiden at first asking at Lone Star Park in his only other start. Silverhill is by Valor Farm stallion Silver City, who is the leading freshman sire in Texas and had his first stakes winner last week with Promise Me Silver in the Debutante Stakes at Churchill.

“I really haven’t thought past today,” Calhoun said about the Silverhill’s future. “We’ve got the colt races up at Saratoga and we could go in that direction, or take the lower road. I don’t know what we’re going to do yet. This was kind of a last-second decision to come up here. We were pointing toward a futurity down there (in Texas) and we decided to send him here – he didn’t get here until Wednesday morning. It was just kind of a spur-of-the-moment deal. We thought he was a nice horse and he belonged up here, but it wasn’t the original plan. So I don’t know where he’ll go from here, but obviously there’s a lot of 2-year-old racing coming up in the next few months. I was very, very happy. I was disappointed that he didn’t win, but I was very happy with the race.”