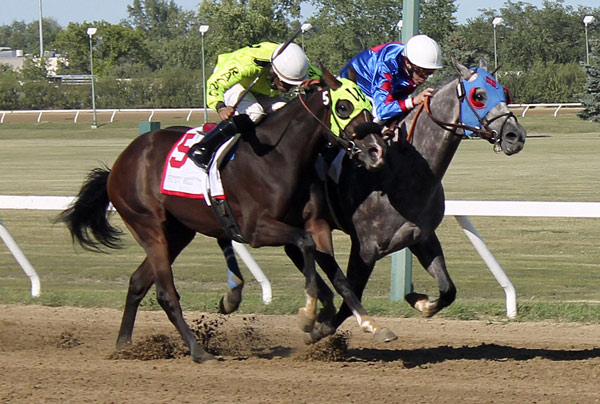 Texas-bred Witt Six has spent a good portion of his career far from his home state, but the gelding has proven to be a tough competitor while racing at nine different racetracks in four states and two Canadian provinces. His greatest success has come north of the border, and he was recently honored as champion 3-year-old colt/gelding in Manitoba, Canada.

Bred and owned by Henry Witt Jr. and sired by Witt’s Texas stallion Drums of Thunder, Witt Six earned $101,619 last year with a record of 13-4-3-1. Trained by Jerry Gourneau, Witt Six won three stakes at Assiniboia Downs in Winnipeg, Manitoba, and finished second by a neck in the $75,000 Manitoba Derby there.

Witt Six went on to run at Northlands Park in Edmonton, Alberta, where he finished second in the Grade 3, $200,000 Canadian Derby to Academic , who earlier in the year won the $500,000 Woodbine Oaks and later earned the Sovereign Award as Canada’s top 3-year-old filly.

Witt Six most recently ran third in the De Cat Stakes at Assininoia Downs on May 13 and has banked more than $140,000 in his career. The Texas-bred broke his maiden at Retama Park in 2014 and earned an allowance win at Sam Houston Race Park last year.