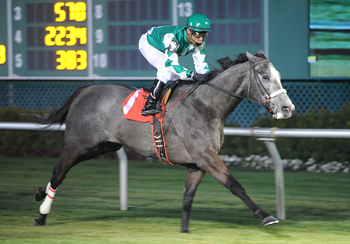 The Saturday night feature at Sam Houston Race Park was the $50,000 Bucharest Stakes for accredited Texas-breds at five-furlongs over the Connally Turf Course.

It was an impressive performance by Triumph and Song, who was making his turf debut and won in commanding fashion.

Jockey Junior Chacaltana guided the 5-year-old son of leading 2013 Texas stakes sire My Golden Song (stands at Valor Farm in Pilot Point, Texas) to victory, breaking alertly from the rail and never relinquishing the lead. The final time of the five furlong turf sprint over a firm turf course was :57.55.

This was the second consecutive stakes for Triumph and Song, who was a game winner of the $50,000 Spirit of Texas Stakes here on January 18. He is trained by Karl Broberg and owned by H & H Ranch.

Broberg and H & H claimed the sprinter for $40,000 at Fair Grounds, and the trainer had no qualms about testing his charge on the lawn.

It was an astute claim for Broberg, who gave credit to his “really smart owners,” as Triumph and Song has earned $60,000 in his two starts since the claim. Sent off as the favorite, he returned $3.20 for the win.

“It was so much fun to watch,” said owner Carolyn Hanek of H & H Ranch. “He has a beautiful stride and is a magnificent Texas-bred. Junior was instructed to send him and he was marvelous. We are so pleased.”

Defending champion Solar Charge ran a game second under jockey Lindey Wade. Breeder Carolyn Barnett co-owns the 7-year-old son of Authenticate with David Alford. Trained by Ellen Williams, he ran a respectable second to Triumph and Song in the $50,000 Spirit of Texas Stakes here on January 18, and made a solid run in the Bucharest but could match strides with the winner.

“He tried hard and gave a good effort,” said Wade.

The Bucharest Stakes is named for the late Thoroughbred sprinter Bucharest, owned by Israel Flores and trained by Amos Laborde, who set track records at Sam Houston Race Park for the distance of five and one-half, six and seven furlongs. His lightning fast six furlong time of 1:08.88 on May 11, 1994, will no doubt stand the test of time. Flores was here this evening to present the trophy.

A total of 48 dogs headed to the starting gate in trials with six qualifiers returning for the final. Three times was the charm for Maximus, who won his first championship in his third appearance at Sam Houston Race Park. The 7-year-old dachshund is owned by James Rodriguez of Spring, Texas. He was awarded the top prize of $250 as he prevailed over Ernie and Vito.

“He didn’t really train for the race,” said Rodriguez. “We chased him away from the cat food, that’s about it.”