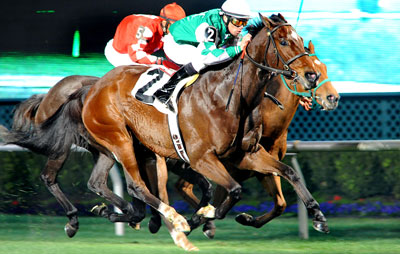 A strong of field of accredited Texas-breds took to the Connally Turf Course on Saturday night for the $50,000 Bucharest Stakes at five furlongs, and Solar Charge came through with a valiant effort to record the victory.

Solar Charge, a 6-year-old son of Authenticate trained by Danny Pish, has run well in stakes at Sam Houston Race Park. He captured the 2012 Spirit of Texas Stakes and ran a game second in the 2013 edition of the main track sprint on January 19. Last year he was the runner-up to Great Mills in the Champion Energy Service Stakes, a five-furlong turf sprint, but tonight was a break through effort. With rider Roman Chapa aboard, Solar Charge tracked Cowgirl N Up, who grabbed the lead early and retained it until the final furlong. Chapa guided the bay gelding to the outside, and cleared the leader by 1 ¾ lengths. The final time of the sprint, over the firm turf course, was :57.33.

“I just had to get my horse to relax,” said Chapa. “We knew there was a lot of speed in the race, but Danny and I talked and wanted to get him to relax and make one big run in the end. That’s what he did.”

Pish had just two weeks to get his charge primed for the turf following his main track Spirit of Texas effort, but Solar Charge made it easy for the top Texas horseman.

“We don’t try to confuse him,” stated Pish. “We just let him do his job and not get in his way. He’s a really nice horse.”

“We’re very proud,” said owner Carolyn Hanek who spoke on behalf of the ownership group. “We love this horse. He ran a beautiful race.”

Cowgirl N Up won the $50,000 Yellow Rose Stakes on January 18 for owner and trainer Caroline Dodwell. The 4-year-old filly by Valor Farm stallion My Golden Song was a more than capable rival to her six male entrants this evening and had the lead until the late surge of Solar Charge.

“She gives it everything she’s got every time she goes out there,” said regular rider Larry Taylor. “We just got outrun at the end.”

The Bucharest Stakes is named for the late Thoroughbred sprinter Bucharest, owned by Israel Flores and trained by Amos Laborde, who set track records at Sam Houston Race Park for the distance of five and one-half, six and seven furlongs. His lightning fast six furlong time of 1:08.88 was set on May 11, 1994.

There will be no live racing on Sunday, February 3, but Sam Houston Race Park will be open for simulcasting. The 2013 Thoroughbred meet continues through Monday, March 17, with post times set for Friday (7 p.m.), Saturday (6:30 p.m.), Sunday and Monday (1 p.m.).