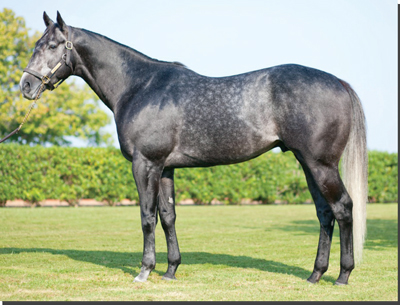 After taking the Debutante at Churchill Downs on Saturday with Robert G. Luttrell’s homebred Promise Me Silver, trainer Bret Calhoun has a 2-year-old gelding shipping to Louisville on Tuesday for next Saturday’s $100,000-added Bashford Manor (G3) in Silverhill.

Silverhill, like Promise Me Silver, is by freshman sire Silver City (whom Calhoun also trained), was bred in Texas, and was a debut maiden winner versus state-bred company at Lone Star Park.

“He’s doing great,” Calhoun said. “He’ll arrive at Churchill Downs Tuesday morning from Lone Star Park. It’s a similar situation as our filly. He was pretty impressive in his debut. I had another horse in there that we were pretty high on (Supermason). I thought he was a pretty good colt and Silverhill got away a little tardy but ran a huge race.

“It gave me a little more confidence in him because I felt like I knew what I had with the other horse but Silverhill was able to range up and then drew off. It was the right race and we decided after we took a look at all the other nominations that we’d take a shot here.”

Silverhill is owned by the Estate of Clarence Scharbauer Jr., who also owned Silver City and stands him at Valor Farm in Pilot Point, Texas.

Silver City has 10 starters, four winners and now one stakes winner from 12 named foals in his first crop.

“I had a lot of optimism for Silver City because he was a very talented horse but never really got to show all his talent because of some injuries,” Calhoun said. “We loved him as a racehorse and I thought with his pedigree he would go on to be a good stallion prospect.”

Calhoun also mentioned that Promise Me Silver came out of her impressive Debutante victory in good form.

“She came out of the race great,” Calhoun said. “We were very pleased with her effort. There’s a chance we may take her to Saratoga but we’re going to see how she looks in the next couple of weeks.”

Calhoun also said that he would be taking his 2013 Debutante winner Fiftyshadesofgold to Saratoga for the Aug. 2 Test (G1).

Also owned by the Estate of Clarence Scharbauer Jr., Fiftyshadesofgold took this year’s edition of the Eight Belles (G3) at Churchill and finished fourth in her last start, the Acorn (G1) at Belmont. The daughter of My Golden Song won last year’s Debutante.

She is expected to record a workout under the Twin Spires this week.

“I will work her mid-week sometime, maybe Wednesday or Thursday,” Calhoun said. “I gave her a little bit of a break and am pointing her toward the Test so I figured I’d give her a little extra time with that race not being until August 2.”