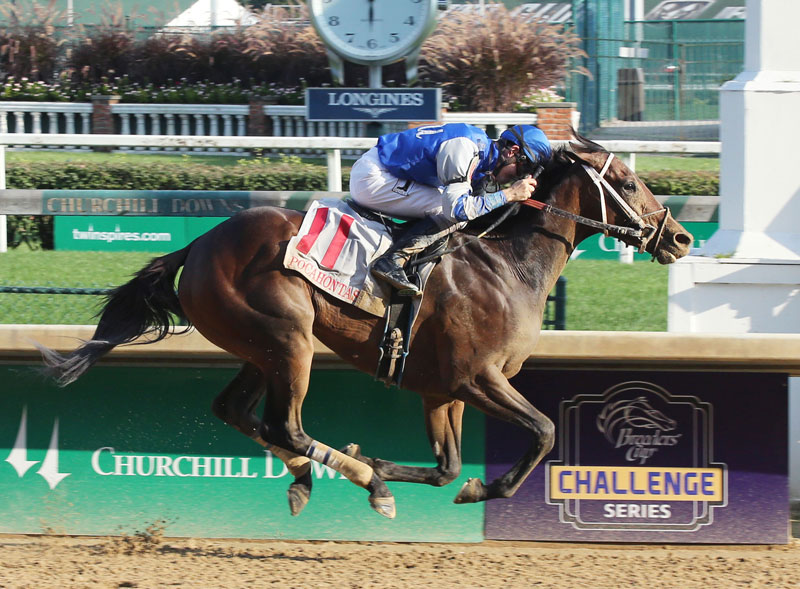 Craig D. Upton’s Texas-bred homebred Patrona Margarita shook things up in Saturday’s 49th running of the Grade 2, $200,000 Pocahontas Stakes for 2-year-old fillies as she scored a 23-1 upset win by 3 ¾ lengths over Kelly’s Humor at Churchill Downs.

Primo Extremo led the field through early fractions of :23.68, :48.83 and 1:14.45 as Patrona Margarita raced in midpack in the clear on the outside. The winner pulled herself within striking reach of the leaders around the far run and took command at the eighth pole to comfortably draw away for the victory.

“What a rollercoaster-day,” said trainer Bret Calhoun. “It’s a tough when you think back on what could have been winning two stakes (Calhoun-trained Mayla was disqualified from first to sixth in the Open Mind for interference in the stretch-run) but we are happy to win the Pocahontas. She’s not Breeders’ Cup eligible so we’ll probably point towards the (Oct. 6) Alcibiades at Keeneland. After breaking her maiden over this track we tried her in the Debutante and she got stopped badly. She’s a Texas-bred so we sent her to Lone Star for the Texas (Thoroughbred Sales) Futurity and she ran a solid third. She’s not a sprinter so we knew she’d improve as the distances got longer. She’s trained phenomenally over this racetrack recently and I’m happy to see everything come together.”

Patrona Margarita also is the early points-leader on the Road to the Kentucky Oaks after collecting 10 points. The Pocahontas was the first of 30 qualifying races to the Grade 1, $1 million Longines Kentucky Oaks to be run next May, and points were awarded to the Top 4 finishers on a 10-4-2-1 scale.

“I’m so happy for her effort this afternoon,” said Upham, who with his wife, Sue Dowling, operates Stoneview Farm in Texas. “I bred her which makes things even more special. Bret (Calhoun) and his entire team do such a phenomenal job. With her breeding we always thought she’d do well going around two turns. It’s special to be on the ‘Road to the Kentucky Oaks’ trail. Our horse will tell us where to send her next. I just hope she comes out of the race happy and healthy.”

Patrona Margarita is by former Texas and current Oklahoma stallion Special Rate, who stood the 2017 breeding season at Glasses Creek in Madill, Oklahoma. This is the first graded stakes winner for the Pulpit stallion.

Patrona Margarita is out of the Texas-bred mare Margarita Mistress, a daughter of the late Texas stallion Naevus, who stood at Stoneview. Margarita Mistress is also the dam of reigning Texas Horse of the Year Texas Chrome, by Grasshopper, who earlier this year became just the second Texas-bred to earn $1 million. Texas Chrome sold for $10,000 at the Texas Summer Yearling Sale, and Patrona Margarita did not meet her reserve when the bidding stopped at $4,000 at the OBS August Yearling Sale.