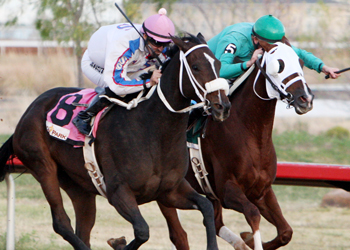 Texas-bred Ol Winedrinker Who returned to Zia Park Racetrack & Casino on Monday for the first time since winning the 2012 Zia Park Derby and set the track record at 1 1/16 miles in the $55,000 Veterans Stakes. Ol Winedrinker clocked 1:41.94 as he and jockey Carlos Madeira fended off Congenial to win by a half-length.

“He’s a neat horse, and it’s good to have him back in New Mexico,” Ol Winedrinker Who’s trainer, Joel Marr, said about the Sligo Bay (Ire) gelding who had been running in Oklahoma, Minnesota and Iowa.

Marr said Ol Winedrinker Who will now be pointed to the 1 1/8-mile, $150,000 Zia Park Distance Championship on Zia Park’s inaugural Land of Enchantment Day on November 24.

“It’s definitely going to be tougher,” Marr said about Ol Winedrinker Who’s prospects in the Zia Park Distance Championship. “There will probably be some graded-placed, maybe even graded stakes winners, horses that will come in for that like they have in the past. It will definitely be plenty tough. But he’ll like the extra distance.”

Ol Winedrinker Who, sent off at 5-1 in the field of eight, made a move to the lead around the far turn. He battled head-to-head with Congenial and jockey Ry Eikleberry through the stretch to break the previous track record of 1:42.19 set by Watch Me Go on September 25, 2012.

“He kind of got in front and got to looking around a little bit, but it worked out perfectly,” Marr said. “We were just trying to instill some confidence in him.”

Ol Winedrinker Who runs for breeders and Texas Thoroughbred Association members Sam E. and Sammy L. Stevens. The 4-year-old has a record of 19-6-4-1 with earnings of $245,779.