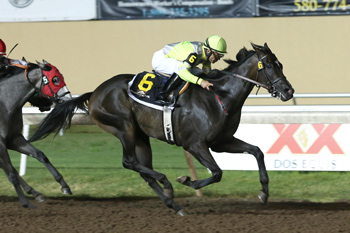 Trainer Donnie K. Von Hemel is scheduled to take two shots at Grade 1 winner Nickname in Saturday’s $100,000 Martha Washington Stakes for 3-year-old fillies Saturday at Oaklawn. He has entered unbeaten multiple stakes winner My Master Plan, a Texas-bred by Oklahoma stallion Oratory, and Ready to Confess in the 1-mile Martha Washington, a race he won in 2006 with Brownie Points.

The 1-mile Trapeze was the filly’s first start around two turns.

“I think going forward you have some opportunities going long, if you can do that,” Von Hemel said. “She did the first time, so we thought we would give it another try here. Hopefully, we didn’t make a mistake.”

My Master Plan and Ready to Confess, a first-level allowance/optional claiming winner going a mile Jan. 15 at Oaklawn, are both 6-1 in the program for the Martha Washington.

Ready to Confess, a daughter of More Than Ready, edged Dorodansa by a half-length Jan. 15 to remain unbeaten in two starts around two turns. Well-beaten in her first two career starts sprinting, She broke her maiden at a mile and 70 yards Nov. 28 at Remington Park.

“She’s a well-bred filly and has shown talent from the very beginning,” Von Hemel said. “I think we were more disappointed those first two races than anything. I think the key was two turns. She’ll definitely stay two turns.”