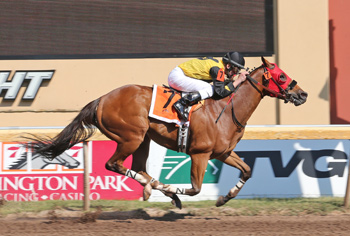 Texas-bred Ivan Fallunovalot tried to sweep the top Remington Park sprint stakes events a year ago but failed in the finale of the two, the Remington Park Sprint Cup. There was no such result this year as the gelding won both the $75,000 David M. Vance Sprint a month ago and the $151,650 Sprint Cup on the Oklahoma Derby undercard Sunday.

Owned by Lewis Mathews of Bismarck, Ark. and trained by Tom Howard, Ivan Fallunovalot was ridden in both the Vance and the Sprint Cup at Remington Park by National Hall of Fame Jockey Calvin Borel. The 5-year-old gelding sat just behind early leader Homerun Berti through the first half-mile of the six furlongs then pounced at the top of the stretch to take the lead for good.

Borel believed Ivan Fallunovalot was better in the Sprint Cup than he was in last month’s Vance Sprint, due in part to the former being run in bright daylight versus night racing for the latter.

“I had an awesome trip and even rode him with more confidence today. He left there running today,” Borel said. “The last time, I think it was the lights, he kind of looked around and then took off. Today he left and sat right off of them just like we wanted and finished. If he goes to the Breeders’ Cup, I’ll be there.”

The Grade 1, $1.5 million Breeders’ Cup Sprint may very well be the next step for Ivan Fallunovalot, to be run at the end of October at Keeneland in Lexington, Ky.

A gelded son of Valid Expectations from the Horse Chestnut (SAF) mare Flashdance Missy, Ivan Fallunovalot was the heavy 1-5 wagering favorite and paid $2.40 to win, $2.10 to place and $2.10 to show. Candip fought for second throughout the race, finishing 2-1/2 lengths behind the winner while paying $5.20 to place and $3.40 to show. Imahit gained for third and paid $3.20 to show.