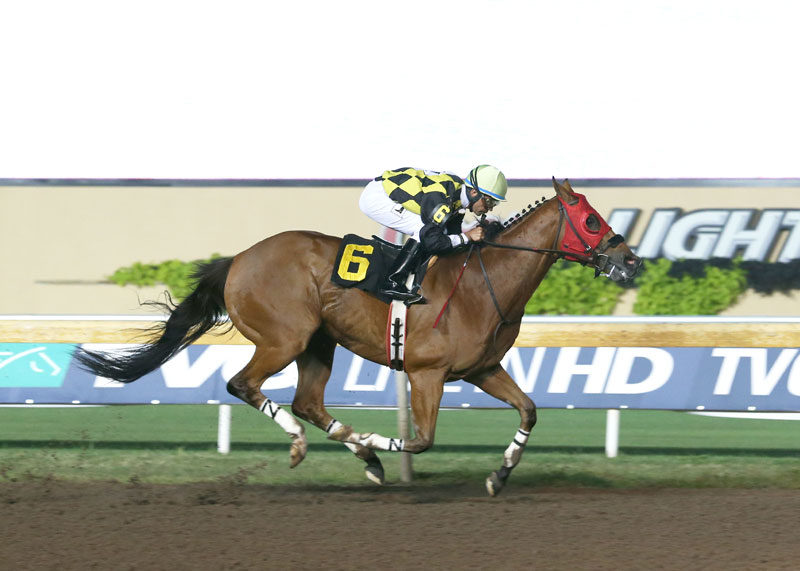 Ivan Fallunovalot returned to Remington Park, coming off a nearly six-month layoff, apparently fresh and ready to roll. The 7-year-old cruised to an easy $40,000 allowance win by 5-3/4 lengths on Saturday night under a hand-ride by jockey Luis Quinonez.

Owned by Lewis Mathews Jr. of Bismarck, Ark. and trained by Tom Howard, Ivan Fallunovalot put forth possibly his best effort in any of his seven career attempts in Oklahoma City. The two-time defending sprint champion at Remington Park and 2015 Texas Horse of the Year, Ivan Fallunovalot broke sharply in the six-furlong event, taking the lead before a quarter-mile had been completed.

Quinonez simply guided the talented gelding as Ivan Fallunovalot had a daylight advantage by the time he reached the top of the stretch. Always appearing to have plenty left in the tank, Ivan Fallunovalot achieved a quarter-mile in :21.84 seconds and a half-mile in :44.06 seconds before crossing the finish in a very crisp 1:08.28 over a fast track. Choir Director was second with Apprehender third, 7-3/4 lengths behind the winner. Ivan Fallunovalot’s time was just off the track record of 1:08.10 established by Smoke of Ages back in 1991.

Ivan Fallunovalot is expected to run next in the $150,000 David M. Vance Sprint, on the Oklahoma Derby Day undercard on Sept. 24. Ivan Fallunovalot won the race last year prior to winning the Grade 3, DeFrancis Dash at Laurel Park later in the fall.

A winner of 16 career races from 27 attempts, Ivan Fallunovalot has now won six races at Remington Park in only seven tries. A son of Valid Expectations from the Horse Chestnut (SAF) mare Flashdance Missy bred by Eileen Hartis, Ivan Fallunovalot made $23,898 for his score on Saturday, boosting his lifetime earnings to $855,956.