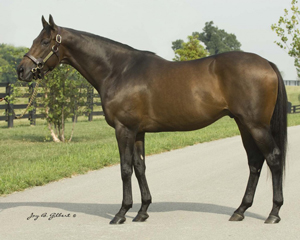 Texas and Oklahoma stallions had a big night at Hoosier Park on October 27 as they sired one stakes winner and one runner-up on the card dedicated to Indiana-breds.

In the $89,200 Indiana Futurity, Dread the Pirate, a colt by Texas stallion Evil Minister, scored easily by three lengths to pick up his second career stakes victory. The 2-year-old Indiana-bred has compiled an impressive record of three wins and a second from four starts and has banked $124,019 for the Dread the Pirate Partnership. Evil Minister, a Grade 3-winning son of Deputy Minister, stands at Eddie George Ranch in Briscoe, Texas.

On the same card at Hoosier, 3-year-old Yeardley, a daughter of Oklahoma stallion Don’t Get Mad, finished second in the $207,800 Slocum Stakes going 1 1/16 miles. A three-time stakes winner who easily captured the $87,900 Hoosier Breeders Sophomore Stakes earlier in the meet, Yeardley has hit the board in 10 of her 12 career starts and her earnings now stand at $319,793. Don’t Get Mad also found success at Hoosier Park as the winner of the Indiana Derby (G3), plus the Derby Trial and Northern Dancer Breeders’ Cup (G3) at Churchill Downs. He stands at Dr. Robert Zoellner’s Rockin’ Z Ranch in Beggs, Oklahoma.