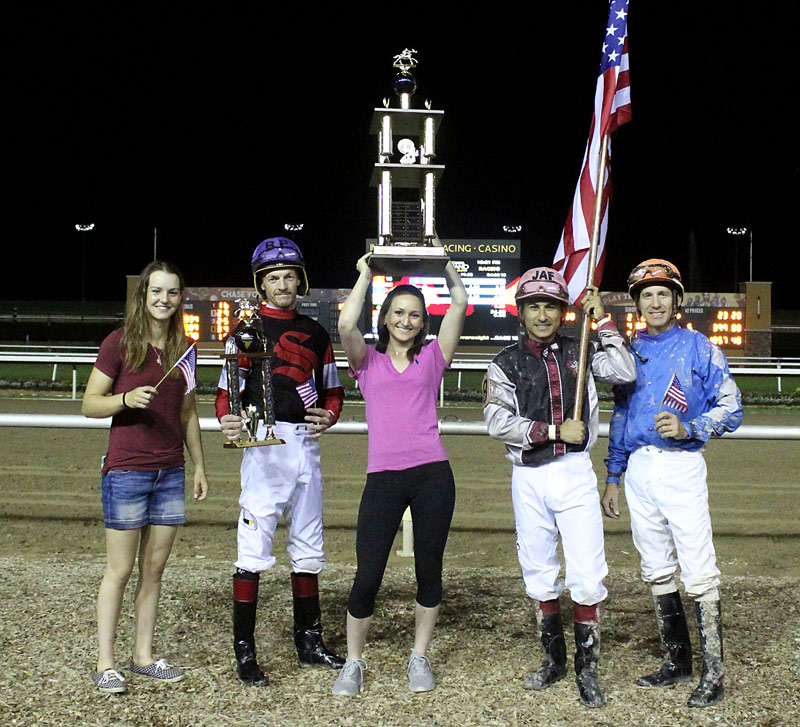 Despite a sweep by Team Mexico in the final Quarter Horse race of the night, the team from the United States retained the title in the fourth annual World Jockey Challenge at Indiana Grand Racing & Casino Saturday, June 24. The event covered all 10 races with 35 jockeys vying for points for their respective countries.

Team USA won six of the 10 races on the card to lead the way in points accumulated from the very first race. Jockeys adding wins to Team USA’s tally included DeShawn Parker, Cheyanna Patrick, Tommy Pompell, James Flores and two wins from Rodney Prescott. Team USA, who won the title in 2016, completed the night with 72 points over Mexico’s 69 points. Panama, represented by the sole efforts of Marcelino Pedroza, finished third with 17 points followed by Brazil, represented solely by Leandro Goncalves with 14 points.

The World Jockey Challenge was part of a special evening of racing tagged as International Fest. In addition to the events on the track, the evening offered Silly Safari with exotic animals, a Henna tattoo artist, Irish Jig Dancers, and International specialty foods available at the outdoor food venues at Indiana Grand.

Flores, who was in to ride Tommy the Train in the first of two Quarter Horse races, sealed the top spot for the United States team with his win in the ninth race. He noted in an interview with Rachel McLaughlin, on air racing personality, that it felt good to help the team out and represent his country in the contest.