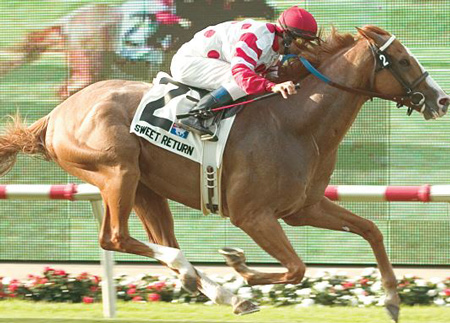 The upcoming breeding year will be the 9th season at stud for the British-bred son of Elmaaul out of the winning Claude Monet mare Sweet Revival. Sweet Return’s offspring have accounted for 15 victories in 2015 and they won 16 races in 2014, including a runaway score by the first-out 2-year-old colt Wildling at Del Mar.

“We’re excited to have Sweet Return join our stallion roster,” said William Nicks of Nicks Farm. “He’ll be one of the most accomplished runners and productive stallions to ever stand in Indiana.”

Nicks, who also stands Grade 1 winner Monba, added, “Nicks Farm is strategically located in Selllersburg, which is 10 miles north of the southern border with Kentucky and less than 100 miles from the Indiana Grand race track in Shelbyville, IN. There’s plenty of turf racing in the area and that plays into Sweet Return’s breeding strength.”