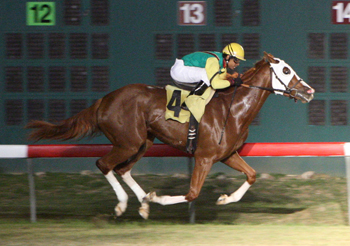 Retama Park on Saturday night presented a pair of turf stakes for Texas-breds with Special U F O scoring a powerful win in the $50,000 Texas Horse Racing Hall of Fame Stakes and Smiles Golden Song capturing the $50,000 Fiesta Mile Stakes for fillies and mares.

In the Texas Horse Racing Hall of Fame Stakes, Southwestern Racing LLC’s homebred Special U F O, a 3-year-old gelding by Texas stallion Special Rate, jumped out to a big early lead and was never headed before hitting the wire 3 ½ lengths in front. With Junior Chacaltana up for trainer Danny Pish, Special U F O got the 1 1/16-mile distance in 1:40.95 to record his fourth straight victory.

The gelding kicked off his 3-year-old campaign with a win against $20,000 claiming company at Lone Star Park in May and then moved up in class to win an allowance race at Lone Star and an allowance/optional claiming race in his turf debut at Retama. His record now stands at 10-5-0-1 with earnings of $70,692.

Special U F O’s sire Special Rate, a son of Pulpit, will stand the 2014 breeding season at Stoneview Farm in Hempstead Texas.

In the Fiesta Mile, Smiles Golden Song enjoyed a stalking trip under jockey David Cabrera before drawing clear to win by 2 ¼ lengths in a time of 1:34.62. Larry Stroope was the winning trainer for owner and breeder Sylvia Baird.

Smiles Golden Song, a 4-year-old daughter of Valor Farm stallion My Golden Song, also won last year’s Fiesta Mile and now has seven wins in 19 career starts. The mare, who has won four of her five career outings at Retama Park, has earned $146,601.

Stallion Special Rate sired the second- through fourth-place finishers led by Shezararebird, a 4-year-old filly owned by Mr. and Mrs. Lonnie Bates and Mr. and Mrs. Michael Danapas who earned black-type for the first time in her career. Bruce Wall’s Ataka Special also earned the first stakes-placing of her career with her third-place finish, and Brian Schartz’s Patty’s Pride, a two-time stakes winner, finished fourth.