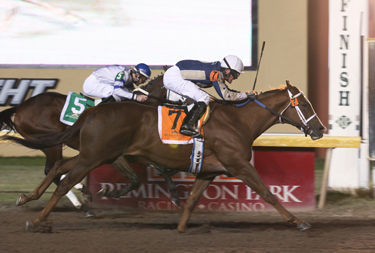 A pair of 2-year-olds with graded stakes racing experience drew the bulk of interest in Friday’s $100,000 Clever Trevor Stakes at Remington Park but it was Smack Smack, at 5-1 odds, closing from well back to pull the upset.

The second leg of the Remington Park 2-year-old Triple Series, the seven-furlong Clever Trevor appealed to the connections of Smack Smack as he’s expected to improve as he goes longer in distance. Owned by Dream Walkin Farms of Norman, Okla., the racing operation for music superstar Toby Keith, Smack Smack improved sooner rather than later as his owner led a large cheering section from outside the winner’s circle. Jockey Jake Barton had the mount aboard the late runner and he let the pace of the race dictate where his runner would be positioned.

“This horse has his own style. You can’t change much about it,” Barton noted. “If they’re not going to go that much faster up front, then we’ll be a little closer. If they go fast, we’ll be back a little farther. We just ride the race as it comes up and he got me there.”

Smack Smack was last in the field of six, nearly 10 lengths removed from the hot pace set by Dunkin Bend and Guns Loaded, as the field went to the lone turn. The speedy pair up front were making their first starts after competing in graded stakes races on either coast. Dunkin Bend won the Grade 3, $100,000 Sapling Stakes at Monmouth Park in New Jersey on Sept. 1 while Guns Loaded ran a very close fifth in the Grade 1, $300,000 Del Mar Futurity in southern California on Sept. 4.

Dunkin Bend, pressured by Guns Loaded, moved a quarter-mile in :22.74 and a half-mile in :44.72 before giving way at that point. At the top of the stretch, Guns Loaded had control while Smack Smack was wide and beginning to rally.

In the final furlong, Guns Loaded had repelled a brief charge from Time Iz Flyin but still had to try and hold on while Smack Smack continued to consume large quantities of real estate. Guns Loaded could not last the distance as Smack Smack made the lead just three strides from the finish, flying by to win by a half-length in 1:23.31 over the fast track.

Trainer Don Von Hemel, the patriarch of the training Von Hemels with sons Donnie and Kelly also in the family business, was humble yet pleased with the outcome. “We had a plan and it came together. We’re pretty lucky when that happens.”

Keith, enjoying his first major stakes win at Remington Park, where he has campaigned horses for many years, thanked the Von Hemels while looking forward to the next challenge. “Don, Donnie and Kelly, they do a great job for us. We send them lots of horses. Some you win, some you lose and we won tonight. He was ready to run them down. We’re going to send him back for the Springboard if Don’s okay with that.

“My tour schedule’s over. You can count on my race schedule if we’re running in the big race; we’re going to be there. If Don’s willing to send him in the Springboard, I’m going to be here to watch.”

The $250,000 Springboard Mile concludes the Remington Park Triple for 2-year-olds on Dec. 15, the closing day of the 2013 season. The race helped launch the stellar 3-year-old campaign for Will Take Charge this year, after he ran second at Remington Park in December 2012. He eventually won the Travers Stakes, the Pennsylvania Derby and ran second, beaten just a nose, in the Breeders’ Cup Classic.

A gelding by Closing Argument from the Victory Gallop mare Smack Madam, Smack Smack was bred in Kentucky by his owner. He picks up $60,000 for winning the Clever Trevor, pushing his overall earnings to $165,360. Smack Smack has now won four of five career starts with his only loss, a third-place effort in the Kip Deville Stakes, here on the Oklahoma Derby undercard.

The Clever Trevor Stakes is named in honor of the Oklahoma-bred gelding who won the first Oklahoma Derby (then the Remington Park Derby) in 1989. He went on to earn more than million-dollars in his career and is retired at Robin’s Nest Farm in Piedmont, Okla., at age 27.