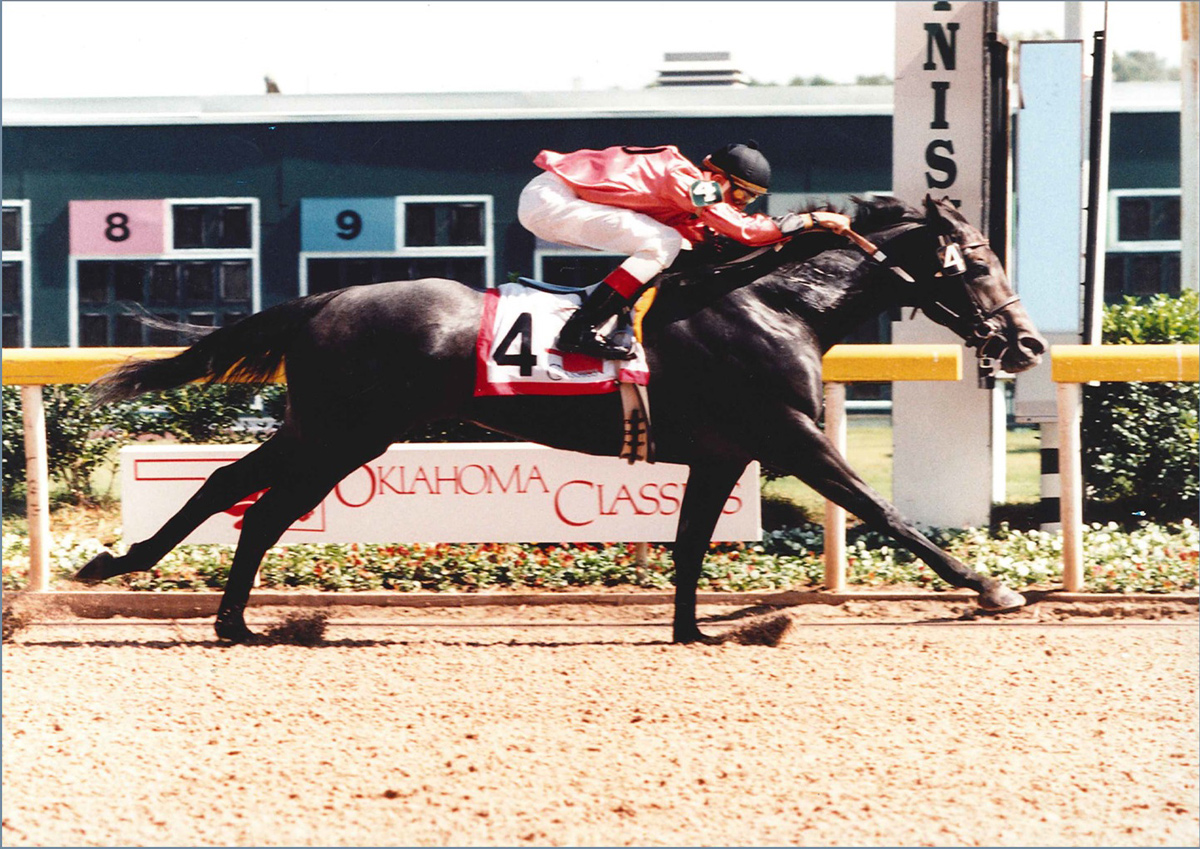 Oklahoma-bred Highland Ice could light up the track with his racing brilliance; this shooting star of a racehorse faded away Wednesday night, passing from this world at the age of 27.

The brilliant record-breaking sprinter, who won 15 of his 16 races lifetime at Remington Park, was treated with kindness and care by the Oklahoma Thoroughbred Retirement Program and under the watchful eye of his caretaker Royce Clay, who pampered him to his final day. “He will forever be in our hearts and we will miss him dearly,” the OTRP posted on its Facebook page.

A gelded son of Highland Blade, by the Icecapade mare Ice Magic, Highland Ice was known as “The Iceman.” He treated his competition like he had ice in his veins, showing them no mercy. Racing from 1995-2001, Highland Ice had 48 starts, 16 wins, nine seconds and eight thirds for $474,090 earned lifetime.

Highland Ice, a dazzling gray/roan, was bred by legendary horseman Walter Merrick of Sayre, Okla., and was purchased at sale as a 2-year-old by Gerald Dixon of Guymon, Okla., for $5,500. Dixon sent him to the barn of trainer Chuck Turco, who also conditioned Dazzling Falls, winner of the Remington Park Derby (now the Oklahoma Derby), the Arkansas Derby and the Alabama Derby in 1995.

Highland Ice was as good a sprinter as Dazzling Falls was a classic-distance horse. Among his accolades were victories ranging from five to seven furlongs, including stakes triumphs at six and seven furlongs. His first stakes attempt came in the $50,000 Oklahoma Classics Juvenile in 1995, winning by a head.

Taking his picture in the winner’s circle after stakes races became the norm for Highland Ice as he won the $50,000 Oklahoma Classics Sprint in 1996 as a 3-year-old. That effort had mouths dropping as he set a half-mile fraction of :43-3/5ths seconds for the half-mile. When he won the Oklahoma Classics Sprint in 1998, he stopped the timer in 1:08.20 seconds, believed to be the true track record at Remington Park for years, before two-time Horse of the Year Welder bettered that by a fraction in 1:08.13 in 2019. That’s how amazing Highland Ice was.

“He had a presence about him like no other horse I’ve ever ridden,” said jockey Glen Murphy, who rode Highland Ice in 19 races, more than any other rider. “He knew he was fast.”

In the 1998 Silver Bullet Centennial Handicap at Remington Park, he finished a length in front of Chindi, who became a millionaire in his career before retiring. Highland Ice’s only victory outside of Oklahoma was in a second-level allowance at Oaklawn Park. The final race of his career came on the Fourth of July in an optional $40,000 claiming-allowance race at Lone Star Park in Grand Prairie, Texas, running fifth.

Highland Ice was voted the Remington Park Horse of the Meet in 1997, when the Oklahoma-bred proved he was more than merely a state-bred champion. When he won the Remington Park Sprint Championship and Silver Bullet Centennial Handicap, both races were for open company. He also bagged the Oklahoma Classics Sprint that year. He won the same three stakes events in 1998, but was edged out for Champion Horse of the Meet by Brush With Pride. Highland Ice did win Champion Sprinter that year.

When he retired in 2001, Highland Ice shared the records for Remington Park victories with 15, sharing the mark with Elegant Exxactsy. The all-time Remington Park win record has stood the test of time, holding up as the standard now with only Welder approaching it some 20 years later. In 2001, nine stakes wins were the most by any horse at Remington Park, the record was held by Highland Ice and Darrell Darrell. Okie Ride managed to break that mark when he won his 10th local stakes in 2016. Welder took over the record during the current 2020 season, moving the total to 11 stakes won in Oklahoma City.

At Remington Park, Highland Ice’s record was 24 starts, 15 wins, five seconds and two thirds for $390,810. He was inducted into the Oklahoma Horse Racing Hall of Fame in 2012.