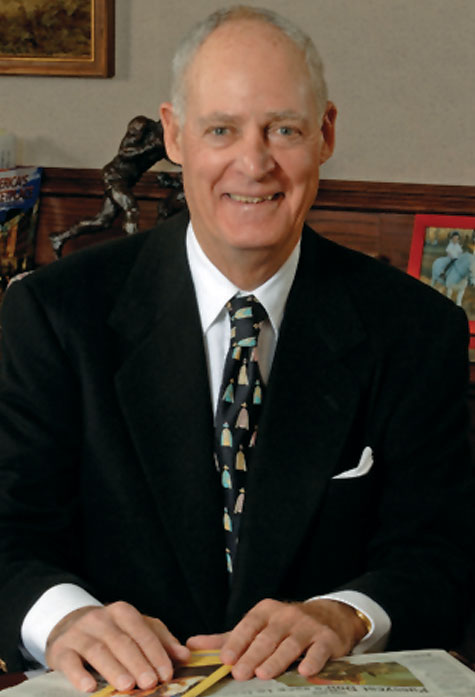 Services for longtime Oaklawn Jockey Club President Charles J. Cella, who died Wednesday morning at his home in St. Louis after a battle with Parkinson’s disease, will be held Saturday at 11:00 a.m. at the Annunziata Catholic Church in St. Louis. The church is located at 9305 Clayton Road, St. Louis, MO  63124.

Cella had been at the helm of Oaklawn Jockey Club since 1968 when he took over after the death of his father, John Cella. His sons, John and Louis, who have been an integral part of Oaklawn’s executive management team for years, will now carry on the 113-year family tradition that began when their great-uncle and great-grandfather formed the Oaklawn Jockey Club in 1904.

Under Cella’s direction, Oaklawn developed into one of the largest and most respected racing centers in America. Oaklawn is credited with numerous innovations in the sport including The Racing Festival of the South, full-card interstate simulcasting and Instant Racing.

Cella’s record as a sportsman was on display throughout his tenure and was perhaps best reflected in Oaklawn’s 2004 Eclipse Award of Merit during its centennial season. Cella was never afraid to go after the big horses. To celebrate the track’s 100th anniversary, he raised the purse of the Arkansas Derby to $1 million and offered a $5 million bonus to any horse that could sweep the track’s 3-year-old races and the Kentucky Derby. Sure enough, Smarty Jones stepped up and accomplished the feat. Cella was inducted into the Arkansas Sports Hall of Fame in 2008.

Cella’s vision for Oaklawn came to fruition in a big way in 2015 when reigning 2-year-old champion American Pharoah made a winning seasonal debut in the Rebel Stakes. He returned for an even more impressive victory in the Arkansas Derby before becoming the first horse in 37 years to win the Triple Crown, sweeping the Kentucky Derby, Preakness and Belmont Stakes.

Between Smarty Jones and American Pharoah, there is a long list of notable champions that have raced at Oaklawn such as two-time Apple Blossom Handicap winner and 2010 Horse of the Year Zenyatta. During Cella’s tenure Oaklawn also became a leading springboard for Triple Crown race winning horses, including Afleet Alex, Curlin, Summer Bird, Lookin at Lucky, Super Saver, Oxbow and Creator. Today, Oaklawn offers one of the richest Triple Crown prep series in America with $2.55 million in purses across four races.

In addition to running a racetrack, Cella was a prominent participant as an owner. His colt, Northern Spur, won the 1995 Eclipse Award as champion turf horse after winning the Breeders’ Cup Turf and more recently he found success with 2013 Razorback and Oaklawn Handicap winner Cyber Secret.

Cella was also a leader within the industry, serving as the youngest president in the history of the Thoroughbred Racing Association (TRA) from 1975 – 1976. His son, Louis, is continuing this tradition by currently serving on the TRA Board and in Aug. 2017, he was elected to The Jockey Club along with four other pillars of Thoroughbred racing.

Cella received his B.A. in political science at Washington and Lee University. Active in numerous sports, Cella was a nationally-ranked squash player for many years. He was also president of Southern Real Estate and Financial Company and served as past director of National Gypsum Company, First Commercial National and the Arkansas State Chamber of Commerce. He also served as a board member of the Arkansas Easter Seal Society and is an honorary trustee of the Schepens Eye Research Institute in Boston.

In 2007, Cella established the Oaklawn Foundation, which over the last 10 years has generated more than $7 million to benefit the citizens of Hot Springs through senior services and scholarships.

He also endowed the Knowlton Incentive for Excellence Awards at Barnes-Jewish Hospital in his hometown St. Louis, as well as the Fred Russell – Grantland Rice Scholarship for Sports Journalism at Vanderbilt University.

Cella is survived by his two sons and a daughter, Harriet Marshall, and 8 grandchildren.