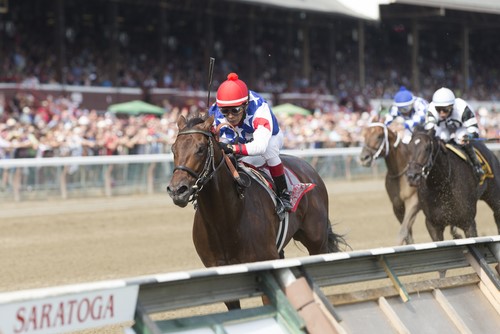 Saratoga race course has just resurfaced its track in preparation for the racing season. Learn about track surfaces and their impact on the race. 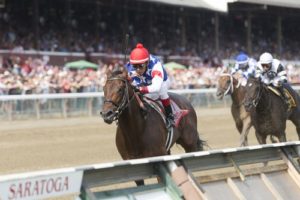 With the racing season looming, Saratoga has upgraded their track surface. But what types of racetrack surfaces are used by the major race tracks, and how does the type of surface impact the race? More on this, plus the coming season at Saratoga racetrack.

The Saratoga racetrack consists of three separate courses – the main dirt oval track where the thoroughbred races take place, an outer turf track known as the Mellon Turf, and an inner turf track that is used for the steeplechase races. The recent work on the Saratoga track surface comprised of updating the inner and outer drainage ditches on all tracks, and adding cushion to the main dirt track, using a combination of sand and clay.

Thoroughbred flat races are run on either dirt, synthetic or turf racetracks. Read on to learn about the different types of horse racing tracks and how each type of track surface has its own benefits and disadvantages. 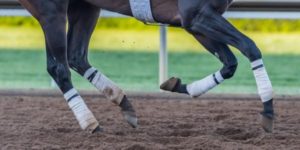 Dirt tracks are the original and most common flat horse racing track used in the US. Dirt tracks are more affordable than synthetic tracks, as they are cheaper to install and generally easy to maintain. Dirt tracks are also known to produce faster race times than races taking place on synthetic and turf tracks – this is because there is more ‘slip and slide’ on a dirt track.

The downside is that dirt tracks provide minimal shock absorption, which leads to increased stress on the horse’s legs. This repeated stress and strain can wear down joints and lead to more injury. Other criticisms of dirt tracks include inadequate drainage, irregular surfaces and changes due to weather conditions and temperature. 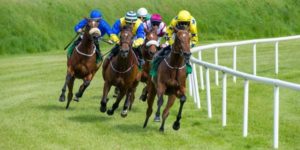 The main advantage of a turf track, is that there is less ‘slip and slide’ for horses, and they are subsequently better for the horses wellbeing in the long run. Another advantage, is that unlike on a dirt track, horses will not need to avoid large amounts of dirt being thrown into the air during a race.
Due to the solid nature of turf, horses are able to bunch together during races, in order to gain an advantage. Unfortunately, the majority of turf tracks in the US do not have adequate drainage systems, meaning that when there is rain, races are moved to another track. Turf tracks also have more ‘grab’ than synthetic tracks, leading to longer race times. 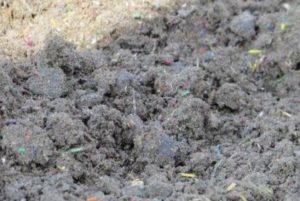 The three main types of synthetic track surfaces are polytrack, tapeta footings and cushion track.
Polytrack has the same texture as a traditional dirt track, but it is made of sand, carpet, spandex and rubber.

Tapeta footings is a four-layer system with Tapeta™ mix at the top, with a geo-textile membrane or porous blacktop underneath, followed by a drainage layer and a solid base at the bottom. Cushion track is a mix of silica sand, stabilising fibres and wax.
Synthetic and turf tracks tend to ‘grab’ leading to reduced speed and slower race times than on the traditional dirt track. Synthetic race track surfaces could be safer for horses as they provide increased shock absorption and this reduced impact puts less pressure on the horse’s legs.
Most synthetic track surfaces are made with a base of gravel and porous asphalt. This incorporated drainage system helps to repel rain and reduces the amount of water held within the track. Disadvantages of synthetic track surfaces are that they wear out quickly and are expensive to maintain. They are also subject to seasonal changes in the quality of the surface and changes in temperature.

Coming up at Saratoga

Saratoga race track offers the best in horse racing and entertainment events in the country. Each summer this historic race track and grandstand comes alive as horse racing enthusiasts and socialites gather together for six weeks of thrilling thoroughbred horse racing and special events. View the Saratoga 2017 calendar and upcoming events at Saratoga to plan your visit at Mywinners.com

Horse racing tracks can either be made of dirt, turf or a mixture of synthetic materials. It is important that any racetrack is maintained properly and has a level, even surface before a race takes place. The Saratoga track surface has recently been updated in preparation for the popular summer racing season.