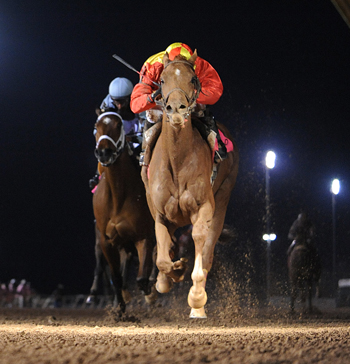 The second running of the $400,000 Houston Ladies Classic went down to the wire with a thrilling finish by Rose to Gold as the 4-year-old daughter of Friends Lake made her first trip to Texas one for the memory books for owners Kathleen Amaya and Raffaele Centofanti.

Trainer Sal Santoro felt the Houston Ladies Classic might be a good way to start the 2014 campaign of Rose to Gold. She arrived on Monday with assistant trainer Larry Kelly.

“Traveling is stressful, for us and for horses,” said Santoro from Florida. “I think getting in early gave her an opportunity to settle and relax.”

Jockey Jesus Rios tracked Unusual Way in the early stages of the mile and one-sixteenth main track feature, covering the first quarter-mile in :24.16 and the half-mile in :48.08. At the final furlong, Unusual Way retained the lead until Rios skimmed the rail and drew off to a 1 ½-length margin of victory. The final time over the fast main track was 1:43.87.

“He saw a little daylight, and Rose was pretty courageous,” said Santoro. “I am proud of them both.”

The finish took a little of the luster off the homecoming from Unusual Heat’s rider, Edwin Maldonado, who made his first trip back to Houston in over a decade. He had begun his career at Sam Houston as an apprentice and is now one of the top riders on the Southern California circuit.

“She was running well and appeared comfortable in the surface,” explained Maldonado. “I whipped her left-handed and she ducked out, which gave the winner just enough room to get through. She ran a good race.”

Rose to Gold, a multiple Grade 3 winner with victories in the 2013 Fantasy and Honeybee at Oaklawn Park, will return to Hot Springs according to her trainer.

“We will get her home (to Calder) and see how she comes out of this race,” added Santoro. “Then we hope to look at the Azeri as a prep for the Apple Blossom at Oaklawn Park.”

The Houston Ladies Classic was the first stakes of the inaugural Penn Gaming Racing Challenge. The national program will incorporate over 20 stakes races in 2014 worth over $5.5 million. The stakes will take place at Hollywood Casino at Charles Town Races, Hollywood Casino at Penn National Race Course, Sam Houston Race Park, and Zia Park. The Challenge includes tie-ins between groups of races in the series, as well as bonuses and prizes that include free nominations, refund of entry and starter fees, and trips to the PNGI owned M Resort in Las Vegas.

Admiral Kitten Game Winner of the Grade 3, $200,000 Connally Turf Cup
A top quality group of turf specialists was assembled for the Grade 3, $200,000 Connally Turf Cup. Trainer Michael Maker, who won the 2012 Connally with Papaw Bodie, picked up a second trophy with an outstanding effort by Admiral Kitten. The 4-year-old son of Kitten’s Joy is owned and bred by Kenneth and Sarah Ramsey, who were honored both as champion breeder and owner in last weekend’s Eclipse Awards. Admiral Kitten won the Grade 1, $500,000 Secretariat at Arlington Park on August 14 and had runner-up efforts in six graded stakes throughout 2013.

Maker gave a leg up to Julien Leparoux, who gave the bay colt a patient and well-timed ride, powering home to a neck victory. The final time of the mile and one-eighth stakes over the firm Connally Turf course was 1:49.80.

“He always runs well from behind,” said Leparoux. “I knew Joe (Bravo), Luis and Rosie were the ones to watch, so I just followed them around. When I asked him to make his run, he did it nicely.”

Luis Saez, who won the Holy Bull earlier today at Gulfstream Park, set the pace aboard Fredericksburg and held on for second. The Michael Matz trainee was returning to stakes company following a turf allowance win last month at Gulfstream Park. Vertiformer ran third under Joe Bravo, and King David, who was the Connally Turf Cup runner-up in 2013, completed the superfecta.

Admiral Kitten returned $3.80 as the favorite in the seven horse field. He improved his lifetime record to four wins from 11 starts with earnings of $729,080.

Sum of the Parts Sets New Track Record in the $75,000 Champion Energy Services Stakes
Tom Amoss and Rosie Napravnik teamed up for two wins this afternoon at Fair Grounds and then joined forces with Sum of the Parts in tonight’s Champion Energy Services Stakes. Owned by Klaravich Stables LLC and William H. Lawrence, the 5-year-old son of Speightstown shipped in off a victory in the Bonapaw Stakes at Fair Grounds.

This was the second victory in the Champion Energy Services for Napravnik, who set a new five-furlong turf record of :56.48 last year aboard Ikon Ike. She did it again this evening, tracking Bounding Bi before surging to the wire of the five-furlong sprint in :56.21.

“He’s made a living on the front end,” commented Amoss before the race on the noted front-running style of Sum of the Parts. “It’s no secret that we are going to send him and hope he holds on. This is a very good field.”

Sum of the Parts, who has run in the last two editions of the Breeders’ Cup Sprint (G1), has now won eight of 18 career starts with earnings of $806,543. The Kentucky-bred, who is out of the Grade 2-winning and Grade 1-placed Slew’s Royalty mare Enjoy the Moment, paid $3.20 as the heavy favorite in the shortened field of seven horses with scratches of both Great Mills and Hogy. Artest was second under Leparoux and Perfect Parker and Maldonado, ran third.

F J Uncle Vic Victorious in the $50,000 Allen’s Landing Stakes
The first stakes of the card was a coming out party for Texas-bred F J Uncle Vic, who ran fourth in last weekend’s Groovy Stakes and returned on seven days rest to dominate the Allen’s Landing Stakes against open company. Ernesto Valdez-Jiminez rode the 3-year-old son of Uncle Abbie for owners Johnny Evans and Terry Eoff, with Eoff also being the trainer. F J Uncle Vic won by 9 ¼ lengths, covering seven furlongs in 1:24.04.

“Winning a race with a Texas-bred on a big night like this means the world to us,” said Eoff.

Eoff indicated that the winner, who returned $5.80 to his backers, will return next month in the Texas Stallion Stakes.

Bred by Mr. and Mrs. Frank Prifitera out of the Texas-bred Rampage mare Let Her Reign, F J Uncle Vic is the seventh stakes winner sired by Texas stallion Uncle Abbie, who stands at Key Ranch near Salado. F J Uncle Vic, who finished a close fourth in the $75,000 El Joven Stakes on the Retama Park turf against open company and then finished third in the $75,000 My Dandy division of the Texas Stallion Stakes on the main track, has a record of 9-2-3-1 with earnings of $67,430.