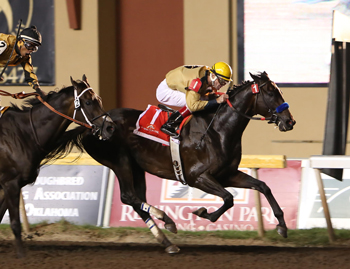 The Opening Weekend of the 2015 Remington Park Thoroughbred Season is just eight days away. The morning workouts continue to reflect preparations for many who may compete in the first stakes events of the season.

If he starts in the Governor’s Cup, Code West will attempt to be the first repeat winner of the race since the millionaire Oklahoma-bred Mr Ross turned the trick in successive years in 1999 and 2000.

Code West is preparing to return from an extended racing break as he has not competed since running sixth in the $100,000 Essex Handicap at Oaklawn Park in Hot Springs, Ark. in February.

Vance Sprint
The first sprint stakes of the season also falls on Aug. 15 with the six-furlong David M. Vance Sprint. Named after Remington Park’s founding president and general manager, the Vance could see the return of the race’s 2014 winner, Ivan Fallunovalot. Owned by Lewis Matthews, Jr. of Bismarck, Ark. and trained by Tom Howard, the 5-year-old worked a half-mile at Remington Park on Aug. 2 in :49.63 seconds, breezing.

Texas-bred Ivan Fallunovalot last raced in the Grade 3, $300,000 Count Fleet Sprint Handicap at Oaklawn in April, finishing second to Alsvid who won the Vance in 2012.

Alsvid recently topped the $1 million-mark in career earnings after finishing fifth in the Grade 2, $250,000 Smile Sprint at Gulfstream Park in Hallandale, Fla. Owned by Black Hawk Stable of Elk City, Okla., Alsvid is trained by Chris Hartman. The 6-year-old gelding has won four of seven career races at Remington Park while earning over $282,000 here.

2012 Oklahoma Derby Winner Returns
Politicallycorrect, winner of the 2012 Oklahoma Derby at Remington Park, has found his way back to Oklahoma City. He won the state’s richest Thoroughbred race while campaigning for then owner/breeders Kenneth & Sarah Ramsey… Claimed twice in 2015, Politicallycorrect is now owned by Danny Keene of Greenville, Texas. The 6-year-old gelding is currently trained by Shea Stuart who is in his first full year of training at Remington Park. Stuart is the son of long-time Edmond, Okla. trainer Clinton Stuart… Politicallycorrect has won seven of 31 career attempts with lifetime earnings of $533,381. He has two works to ready for the Remington Park season with an Aug. 2 five-furlongs in :59.01 seconds (handily) as the most recent.

Guests on Opening Night, Friday, Aug. 14, will enter a drawing and could be selected to draw from the “Big Bag of Bets” where they will receive either a $100 win bet, $100 place bet of $100 show bet. There will be three drawings from “Big Bag of Bets” throughout the night with six guests getting bets in each drawing.

Upon entering the Racing Lobby on Saturday night, Aug. 15, guests will receive a Mystery Mutuel Voucher worth between $2 and $1,000. The vouchers will be distributed, while supplies last, beginning at 5pm.

Berry Special Season Begins
The 2015 Thoroughbred Season will be the final one for all-time leading local jockey Cliff Berry, a winner of 2,078 races at Remington Park and more than 4,400 overall. Berry has announced his retirement once the season closes in December. In honor of his career, Remington Park will reward fans with cash or prizes, for all wins posted by Berry this season.

Remington Park will open the 2015 Thoroughbred Season on Friday and Saturday, Aug. 14 & 15. The regular post time throughout the season is 7pm (central). The normal weekly schedule of racing will take place Wednesday thru Saturday, beginning on Aug. 19.

Open daily at 10:30am for casino gaming and simulcast racing, Remington Park features the Bricktown Brewery on the casino floor. Admission, general parking and valet parking are always free at Remington Park, home of the Grade 3, $400,000 Oklahoma Derby on Sunday, Sept. 27.

Tracked by over 85,000 fans on Facebook and 6,500 Twitter followers, Remington Park is Oklahoma City’s only Racetrack & Casino and is located at the junction of Interstates 35 & 44, in the heart of the Oklahoma City Adventure District. For more information, reservations and group bookings please call 405-424-1000, 866-456-9880 or visit remingtonpark.com.