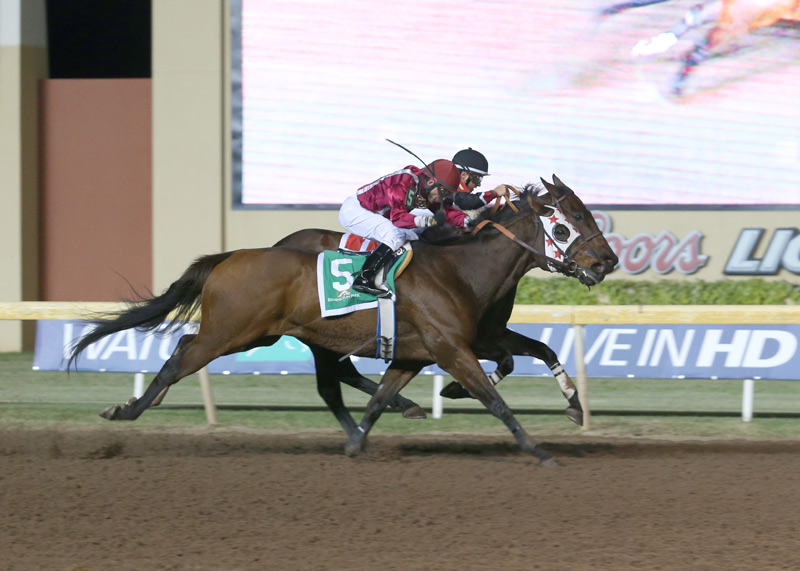 The 10-year-old local champ collapsed at about 8:45am, after finishing his second four-furlong breeze of the Remington Park pre-season. Jockey Luis Quinonez was up for the work and immediately sought to aid the horse. Okie Ride is believed to have suffered a pulmonary event according to track veterinary staff.

Owned and bred by the Richter Family Trust of John & Kris Richter of Perkins, Okla., Okie Ride was trained by Kenny Nolen.

“All of us are just devastated,” Nolen said from Canterbury Park in Minnesota where he is racing this summer. “He was just such a big part of us, and part of our family. We are all taking it hard, especially my wife Sally. When ‘Okie’ first came to us he was a shy horse. Sally started working with him and caring for him and it changed his personality. He became her horse. He would hear her voice when she came to the barn and you could immediately see him perk up. He had a great personality and confidence because of her and I truly believe she brought the best out of him when he raced.

“I’m very sad that I wasn’t there this morning but Sally was and I at least I know she was with him.”

The news about Okie Ride hit with shockwaves throughout Remington Park.

“Our deepest sympathies are extended to the connections of Okie Ride,” said Remington Park president and general manager Scott Wells. “The Oklahoma horse racing community lost one of its brightest stars this morning. Okie Ride was a constant fixture in our winner’s circle for seven years which speaks volumes for the way the Richter family and the Nolen family cared for him. He will be missed by thousands of fans.”

Okie Ride was preparing for his annual return to Remington Park action, where he has competed exclusively, with great success, since the fall of 2013. The lighter racing schedule, normally four to six races per Remington Park season, was an advantage to the Oklahoma-bred gelding by Candy Ride (Arg.) from the Geiger Counter mare Tic Tic who would have attempted to set records in Oklahoma City for career wins this season.

“Right after his last race each season at Remington, we would pull his shoes and he would go home to the Richter’s place where he would have a good, long vacation for a few months,” Nolen said of Okie Ride’s annual routine. “A few years ago we decided to give him those breaks and just focus on the races available for him at Remington Park. I think it was a big part of why he was so successful for so long, because he didn’t have to race year-round. The schedule and the money at Remington Park were a perfect spot for him. I think it is good for all horses to get a vacation.”

Okie Ride shares the mark for most wins in the Oklahoma Classics Sprint, winning the race in 2011, 2012, 2015 and 2016. The four victories puts him alongside Highland Ice who won the Classics Sprint in four consecutive years, 1996-1999. Okie Ride’s four career wins on Classics night ties him with She’s All In and Notable Okie for the second-most victories in the series for Oklahoma-breds.

Overall, Okie Ride started 41 times, winning 16 with 10 second-place runs and another six finishes in third. His stats at Remington Park: 33 starts, 14 wins, seven seconds and six thirds. Okie Ride earned $789,714 in his career with $700,642 made at Remington Park.