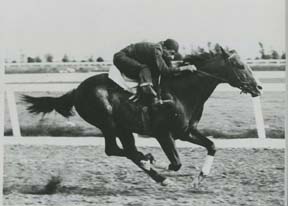 The remains of the legendary three-time world champion American Quarter Horse Go Man Go and his grave monument were moved to Ruidoso Downs on Tuesday morning.

The remains had been at the former Buena Suerte Ranch in Roswell, New Mexico. That is where he spent the final years of his life.

The grave is located by the infield winner’s circle, which will now be called the Go Man Go winner’s circle. A bronze plaque detailing his accomplishments will be added.

“I have been talking with the current owners of the Buena Suerte property for several years about the move to Ruidoso Downs,” said Dr. Leonard Blach, who was the Buena Suerte Ranch veterinarian. “They finally agreed. It is the best place for him.”

Go Man Go was foaled in 1953 and died in 1983. He bred mares until he was 23-years-old and led the post parade for the All American Futurity during the final year of his life.

Known for his feisty personality as a racehorse, Go Man Go was one of the dominant horses in Quarter Horse racing history. He was the world champion for three consecutive years (1955-1957), a feat that may not be matched by any other colt since he would likely be retired to the breeding shed after his first or second world title.

After his retirement, Go Man Go became one of the all-time most influential stallions. The son of the Thoroughbred Top Deck and Lightfoot Sis sired seven champions and two All American Futurity winners from his 83 stakes winners. His stud fee reached $10,000, the highest in Quarter Horse racing at the time.

“It is an unbelievable honor to have Go Man Go’s remains here at Ruidoso Downs and I want to especially thank Dr. Blach,” said Ruidoso Downs’ General Manager Shaun Hubbard. “Go Man Go was a legend on this track and now everyone can visit his gravesite.

“It is designed so fans can come to the gravesite and they’re encouraged to take photos at this honored place.”

In the Racehorse Hall of Fame are also Go Man Go’s registration papers, his trophy for winning the 1957 Wonder Lad Stakes, a set of his shoes, a saddle used on him and the number-one bronze of a limited edition series commissioned by Harriett Peckham, one of his owners. She was called “the first lady of Quarter Horse racing” and built Buena Suerte Ranch.