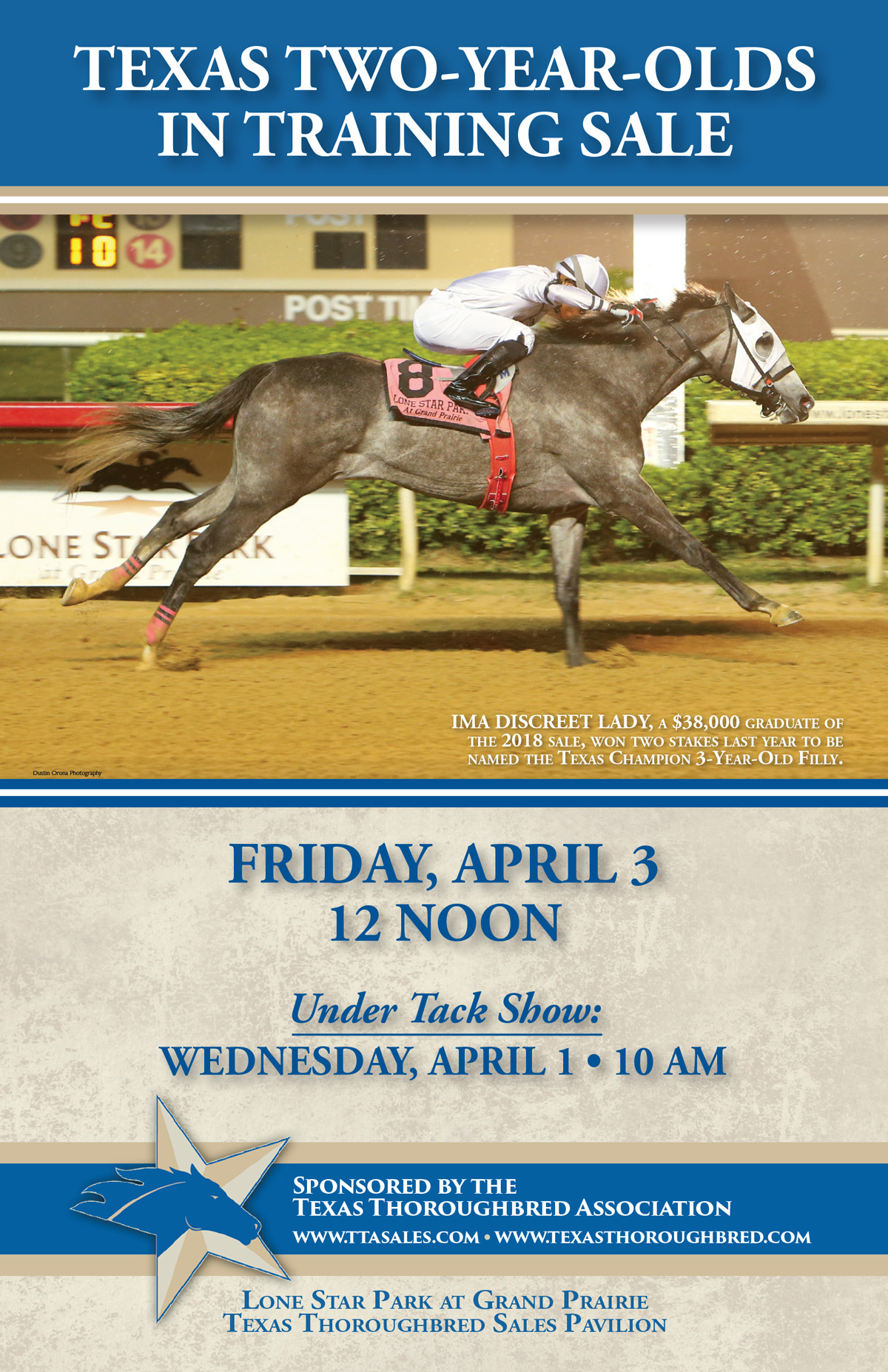 The Texas Thoroughbred Association and Lone Star Park are pleased to announce a record number of consignments to the Texas 2-Year-Olds in Training Sale. A total of 182 head, pending the addition of supplements, have been entered in the sale set for Friday, April 3, at 12 noon at Lone Star. The under tack show will be held Wednesday, April 1, at 10 a.m. at the track.

This year’s head count is up nearly 35 percent from last year’s 135 (including supplements) and more than double the number in the 2016 sale, which was the first held jointly by the TTA and Lone Star.

“We expected to have more entries after the passage of beneficial legislation in Texas last year, but we were a little surprised by just how much interest there’s been from both consignors and buyers,” said Mary Ruyle, executive director of the TTA. “We are excited about the two incentive programs related to this sale and the overall increase in purses in Texas and incentives for Accredited Texas-breds.”

The passage of H.B. 2463 is expected to inject up to $25 million annually into the Texas horse industry, and its effect is already being seen with increased purses in 2020 for the current Sam Houston Race Park meet and upcoming Lone Star meet.

In addition, money generated by H.B. 2463 is being used to provide a rebate of up to one-half of the entry fee to consignors at this sale. Plus, all graduates of this sale will be eligible for a new purse incentive program for all races this year at Texas tracks. The incentive is available for all graduates, regardless of where they were bred.

As always, sale graduates will be eligible for the Texas Thoroughbred Futurity this summer at Lone Star with divisions for fillies and colts/geldings offering purses of $100,000-estimated apiece.

This year’s catalog includes offspring of many of the Southwest’s leading and emerging stallions, including Astrology, Bradester, Court Vision, Custom for Carlos, Early Flyer, Flat Out, Half Ours and Too Much Bling.

For more information and the online catalog, including photos and videos after the under tack show, go to ttasales.com.