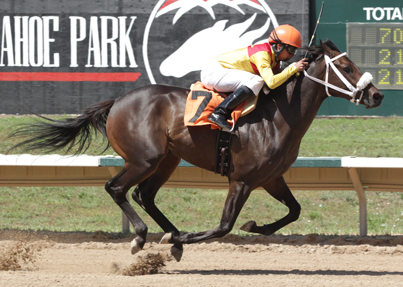 Arapahoe Park near Denver hosted a trio of Thoroughbred stakes over the weekend, and all three featured runaway winners.

Rebranded came from New Mexico to put his stamp on the Colorado Derby with a 12 1/2-length domination on Sunday. Jockey Elvin Gonzalez took the 1-5 favorite in the field of seven to the lead down in the first quarter-mile of the 1 1/16-mile, $40,000 race for 3-year-olds and never looked back. The Justin Evans-trainee owned by Tony Pennington stopped the clock in 1:45.21.

“He ran a great race,” Evans said. “I was really happy. I would have liked to see him finish a little better because Elvin [Gonzalez] had to keep him straight through the stretch. When this horse figures out what it’s like to win races, he’s going to be a monster. He’ll be a force to be reckoned with.”

Ima Happy Strike, who had shipped from New Mexico to win the Inaugural Stakes at Arapahoe Park on May 25, finished second for jockey Travis Wales, trainer Dwain Eaton, and owner Donna Eaton. Lookingoodinatux was a further one length back in third.

The Colorado Derby was Rebranded’s second stakes success after capturing the $100,000 Riley Allison Futurity at Sunland Park in New Mexico in December 2013. His third career win pushed his lifetime earnings over the $200,000 mark to $201,010.

Sky T emerged as the newest Colorado-bred star with a dominant 9 1/4-length victory in Sunday’s CTBA Futurity. Coming off a 13-length victory in the trials on June 28, the 2-year-old gelding owned by Richard Lueck, trained by Gary Cross, and ridden by Karlo Lopez led from start to finish in the $48,903 final as the 1-10 favorite in 1:11.32. The son of sire Mr. Trieste and dam Skyline Gal defeated Rock On Dave, who was also second to Sky T in the trials. Red Carpet Runner took third.

Crazy Cora faded to fifth in her trial race to the CTBA Lassie on June 28 as the odds-on 1-2 favorite but rebounded to capture Saturday’s 6-furlong, $47,245 final by 4 1/2 lengths. Jockey Dennis Collins took the 2-year-old chestnut filly sired by Grand Minstrel out of the dam Celee straight to the front and then steadily pulled away from the competition to win in 1:12.20. The Cole Jackson-trainee owned by Jerry and Bev Slaughter went off as the 6-1 third choice in the field of seven Colorado-bred 2-year-old fillies. Lightning Lady finished second with a further 1 3/4 lengths back to Ms. Battlefield in third.