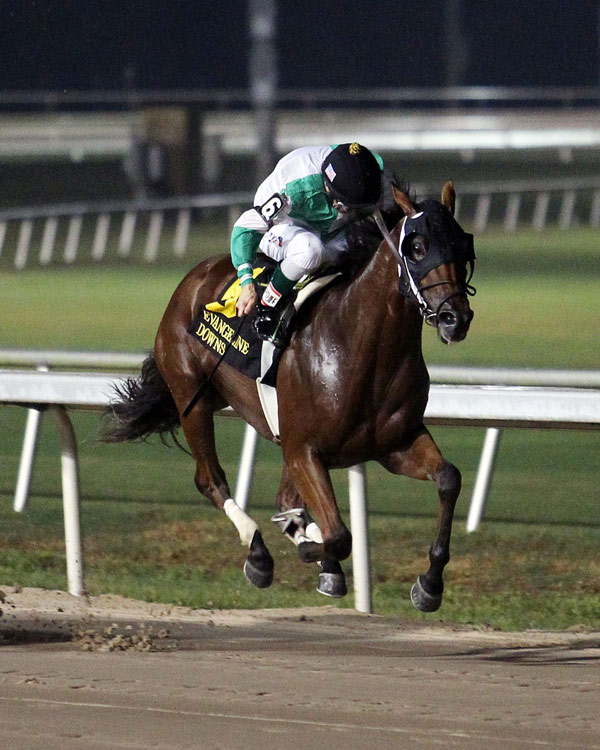 Virginia Lazenby Racing Stable’s Ready Prospector was able to survive an early speed duel and then withstand a furious charge from the favored I Want a Picture to prevail in the $75,000 D.S. “Shine” Young Futurity for colts and geldings on Saturday night at Evangeline Downs.

Ready Prospector was sent right up into the fray by jockey Gerard Melancon at the start and engaged with another longshot in Piranha Tough through solid early fractions of 22.02 for the quarter-mile and 46.04 for the half-mile. When the field entered the stretch, Ready Prospector had put away Piranha Tough, holding a 3-1/2 length lead, but the 9-5 favorite, I Want a Picture came running in the final furlong and just came up a head short. Ready Prospector finished the 5-1/2 furlongs in a final time of 1:05.46 over the wet-fast racetrack.

Ready Prospector scored the first win of his brief career in the “Shine” Young Futurity. He was bred in Louisiana by Virginia Lazenby and is trained by Oscar Modica. The maiden-breaking win earned Ready Prospector the $45,000 first-place purse and increased his lifetime earnings to $50,200. He is a two-year-old gelding by Custom for Carlos and out of the Not For Love mare, Vera Belle.

The fillies division of the $75,000 D.S. “Shine” Young Futurity was also run on Saturday night at Evangeline Downs. The original field of twelve was scratched down to six and the best of that half-dozen was She’screative. The filly assumed the lead shortly after the start and led through a quarter-mile of 22.31 seconds and a half-mile of 46.19 seconds. She received a challenge from Eye Craft, who briefly took the lead in the stretch. However, She’screative re-rallied on the rail to win by 2-1/4 lengths in a final time of 1:06.53 for the 5-1/2 furlongs.

She’screative is a 2-year-old filly bred in Louisiana by T.L. Holyfield Racing Stable, LLC. She is owned by Thomas L. Holyfield, trained by J.R. Caldwell and was ridden to victory by Dusty Shepherd. Her record is now a perfect two-for-two and the $45,000 first-place purse increases her lifetime earnings to $60,600. She’screative is by Creative Cause and out of the Two Punch mare, She’s a Rebel Too.