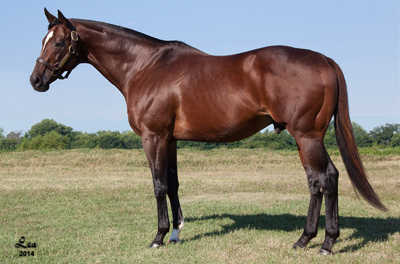 Read the Footnotes, a graded stakes-winning and -siring stallion, has been relocated from Oklahoma to stand at Creekside Farm near Tularosa, New Mexico. He will stand as property of Bryan and Megan Petty as their new farm. Megan Petty is a longtime TTA member and practicing veterinarian who is also involved in the TTA’s Paddock Foundation.

“This horse is a good fit for New Mexico,” Megan told BloodHorse. “You have the influence from Smoke Glacken, who was fast, and then Read the Footnotes had one of the fastest works ever at a Fasig-Tipton sale. He went on to prove that speed on the track.”

On the track, Read the Footnotes won five of his eight starts with stakes wins in the Grade 2 Remsen, Grade 2 Fountain of Youth and Grade 3 Nashua while winning at distances from five furlongs to 1 1/8 miles.

The son of Smoke Glacken has sired the earners of nearly $18 million and was a top five sire in Oklahoma last year with 2017 progeny earnings of $1.16 million. Among his top runners are Grade 1 winner Rightly So and multiple stakes winner and $608,318 earner Readthebyline.

Read the Footnotes had been standing as property of Eureka Thoroughbreds at River Oaks Farms in Oklahoma. Eureka is owned by Mike Grossman, who also stands stallions in Texas at his Eureka Thoroughbred Farm, which is managed by Bill Tracy, Megan’s father.