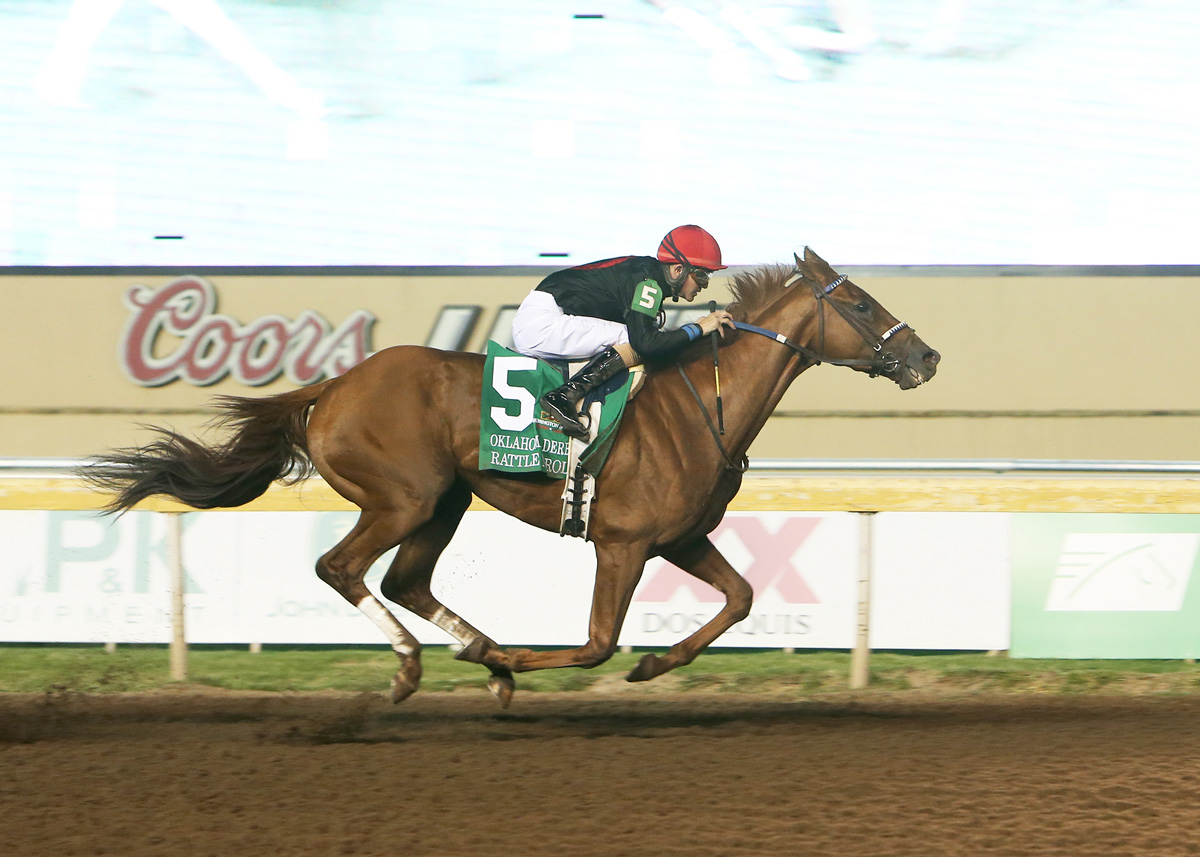 Trainer Ken McPeek loved watching his 3-year-old colt, Rattle N Roll, win the Grade 3, $400,000 Oklahoma Derby at Remington Park on Sunday so much that he was already making plans for a return trip to the Sooner State.

“Our owner has been gracious enough to allow us to place this horse in good spots and I thought Oklahoma would be perfect for him,” said McPeek after receiving the Derby trophy. “We may have to find a race here for him as a 4-year-old.”

Mike Mackin of Louisville, Ky., owns Lucky Seven Stable in conjunction with his three brothers and sister and they own this 3-year-old colt. The stable is named for Mackin’s  parents and five siblings. Hence, seven.

It was more than lucky on Sunday as Rattle N Roll proved his talent with a strong run down the stretch, digging deep to hold off the late charge of Steve Asmussen-trained King Ottoman. Rattle N Roll, as the 7-5 second favorite in the race, finished 1-1/2 lengths in front of King Ottoman (11-1) and the runner-up was 9-1/4 lengths ahead of the third-place finisher Best Actor. The even-money favorite, Best Actor, from trainer Brad Cox’s barn, ran third virtually the entire length of the race.

Jockey Brian Hernandez, Jr., has won two in a row on Rattle N Roll, a colt by Connect, out of the Johannesburg mare Jazz Tune, and three of his last four. Those victories include a trip to the winner’s circle in the $250,000 St. Louis Derby on Aug. 20 at Fan Duel Horse Racing, the old Fairmount Park racetrack and in the $200,000 American Derby at Churchill Downs, Mackin’s home track.

“I’ve ridden him so many times, I’ve learned his running style,” said Hernandez. “I just let him do his thing and he does it. He’s a Grade 1 winner and a Derby winner.”

Hernandez said he wasn’t nervous at all as King Ottoman, winner of the Texas Derby at Lone Star Park in May, came rolling up on him and engaged a fight down the stretch.

“My horse threw his ears up; he heard him coming,” said Hernandez. “But, no, I wasn’t nervous. All I had to do was become a great passenger.”

It was a perfectly patient race from Hernandez as he let Rattle N Roll drop back to last in the field of eight down the backstretch in this 1-1/8th mile race over the fast main track. Red Knobs and Big Chopper set a swift pace up front in the early going, covering the first quarter-mile in :23.59, ;47.76 for the half-mile and then both began to fade after three-quarters of a mile in 1:12.11. At that point, Rattle N Roll took over, taking the lead at the top of the stretch. From that point on it was just a battle of hearts in a race to the wire in the final eighth of a mile. He hit the mile pole in 1:37.11 and won in a time of 1:49.50.

Rattle N Roll earned $240,000 for the victory and came oh so close to joining the millionaire club for Lucky Seven Stable. The money he earned from the $400,000 purse put him at $998,105 in earnings. He has started 13 times, winning five, running second once and third twice. He was bred in Kentucky by St. Simon Place. They purchased this colt for $210,000 in the Keeneland Yearling Sale in 2020.

“We thought he was beautiful ever since we saw him as a yearling,” McPeek said.

Mackin has said the family wanted to own a sports franchise but that was too far out of reach so they got into the horse racing business and living in Louisville made it a perfect fit.