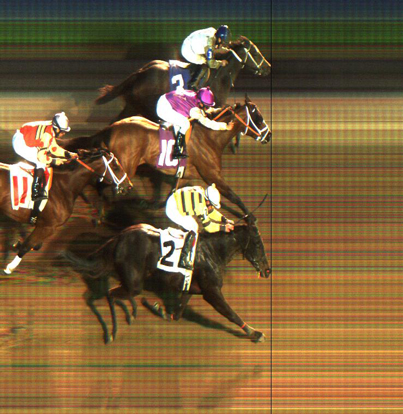 For the first time in the almost a half-century of Thoroughbred racing at Evangeline Downs, a triple dead heat for the win was recorded when three horses hit the wire together on Friday night.

The three-way tie for first is so rare in Thoroughbred horse racing that only a half-dozen have occurred since 1990, the most recent being at the recently closed Hollywood Park in Southern California in December 1997. Hollywood Park was also the site of the most recent triple dead heat, which was for the runner-up spot in a race conducted last December.

It happened at Evangeline in a $15,000 claiming race for Louisiana-bred maidens as All in the Art, Chessie Slew and Memories of Trina all hit the wire together.

The official photograph showed all three horses noses touching the wire, so a triple dead heat was declared by the Evangeline Downs racing officials and stewards of the following horses: Chessie Slew, a 25 to 1 longshot ridden by Filemon Rodriguez; All in the Art, at odds of 5 to 1 with jockey Donnie Meche, and Memories of Trina, at 8 to 1, ridden by Carlos Marquez. In the frenzied finish, the winning trio ended up just three-quarters of a length in front of fourth-place finisher Lady Bistineau.