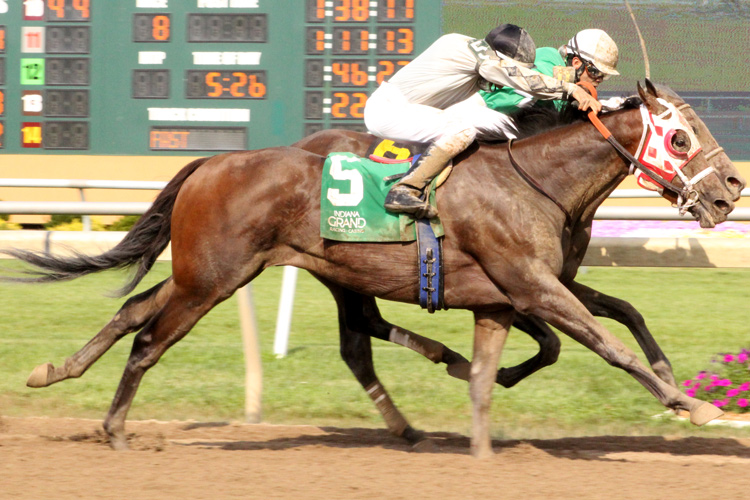 The $150,000-guaranteed Governor’s Stakes for Indiana-bred 3-year-olds had a different ending than expected. As front end speed began to fade, R Luckey Charlie kicked into gear and won the tight finish over Badabing Badaboom to take the title Wednesday, Aug. 3 at Indiana Grand Racing & Casino.

Starting from post five, using early speed was not an option for R Luckey Charlie and jockey Richard Bracho. However, a lot of horses to their inside had the needed speed out of the gate to set the pace. Easy Doer and Rodney Prescott from post one were the quickest to grab the top spot followed by El Jake O and James Graham in a stalking position. Derby Express and Malcolm Franklin also excelled just enough to get along the inside behind Easy Doer and wait their turn to press forward.

Fractions of :22.87 and :46.22 were placed on the board and by the time the field entered the final turn, Derby Express had already overtaken El Jake O and had his sights set on Easy Doer. Another horse that began to close in was Badabing Badaboom and jockey Francisco Torres, who chose to move up along the inside of Easy Doer to save ground for the stretch drive. By this time, R Luckey Charlie moved into contention and halfway down the stretch, he hooked up with Badabing Badaboom for an exciting race to the finish.

Matching each other stride for stride, it became a matter of timing as to which horse would reach the finish line first. In the end, R Luckey Charlie was able to get a slight edge over Badabing Badaboom and claim the win by a nose at the finish line in a time of 1:42.41. Derby Express maintained ground to finish third.

“This horse (R Luckey Charlie) has been working very good and I love this horse,” said Bracho, who is currently among the track’s top five jockeys this season. “I wanted to get into position early and at the half mile, I knew I had a lot of horse.”
The performance by R Luckey Charlie, the fifth choice on the board in the field of nine, might not have been a surprise for Bracho, but he was a surprise to the betting public. The three-year-old son of Adios Charlie paid $21.80, $9.20 and $5.60 across the board Marvin Johnson trains the gelding for owner Richard Batz, who also bred and raised R Luckey Charlie.

When asked about his thoughts about the stretch drive, Johnson replied, “I was hoping to hang on. It was very tight and I was glad to get the nod. Pace makes the race and I thought there was plenty in there. We just wanted to stay close if we could and save ground.”

The game plan for Bracho and Johnson worked out perfectly for R Luckey Charlie, who prevailed in the end. He is now two for five in 2016 and increased his career bankroll to more than $165,000. Bracho, who was a late arrival to Indiana Grand last fall, has ridden the gelding in all but one of his eight career starts.

Bracho, a native of Venezuela, has adapted well to the jockey colony at Indiana Grand this season. The victory aboard R Luckey Charley is his 39th win of the year and he is nearing $1 million in purse earnings this season. A six-time leading jockey in Venezuela, Bracho had a lot of success riding in his native country, winning the Simon Bolivar, Venezuela’s biggest race two times and also captured the prestigious Clasico Caribe three times when it was held in his country. With more than 2,000 career wins in Venezuela alone, Bracho hopes to remain in the U.S. and continue to add wins to his already impressive tally for a career that has spanned the past 26 years.

The win moves Johnson into seventh place on the list of leading trainers at Indiana Grand this season. A native of Nebraska, Johnson has been a mainstay on the Indiana circuit for the past decade and is among the track’s top trainers each year.