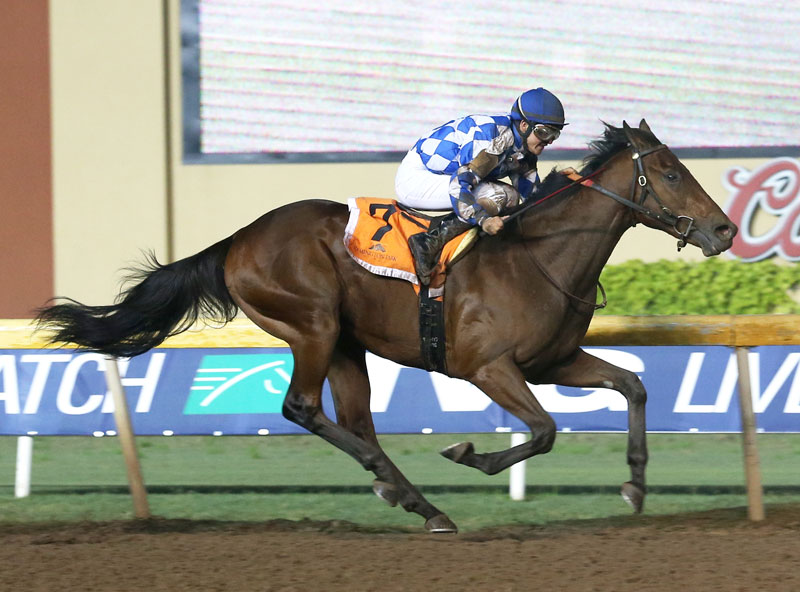 The $300,000 Springboard Mile, the richest race for 2-year-olds in the Remington Park Thoroughbred Season, pulled 12 entries this morning. The Springboard is the main event on a 12-race program that takes place on the final race date of the season, this Sunday, Dec. 11, starting at 3pm.

The winners of both of the major 2-year-old local preps for the Springboard Mile at Remington Park have entered to try and add the top trophy to their collection. U S Officer, winner of the $100,000 Clever Trevor Stakes on Nov. 4 and Cool Arrow, winner of the $75,000 Kip Deville Stakes on Sept. 25, will be joined by 10 other rivals in the 11th of 12 races on Sunday.

U S Officer has won two consecutive races at Remington Park after finishing a well-beaten seventh behind Cool Arrow in the Kip Deville. Trained by Danny Pish, U S Officer won going one mile for the first time, in an allowance race at Remington Park on Oct. 14. He then came back to score the Clever Trevor Stakes for owners Jerry Durant and Bill Jordan of Weatherford, Texas. Jockey David Cabrera has ridden U S Officer to both of his local wins and he will retain the mount for the Springboard.

Cool Arrow shipped from Kentucky to win the Kip Deville Stakes on the Oklahoma Derby undercard in late September. Trained by Joe Sharp for owners Brad and Misty Grady of Covington, Texas, Cool Arrow then ran a solid second in the $300,000 Spendthrift Stallion Stakes at Churchill Downs on Oct. 30. Jockey Luis Saez has been named to ride in the Springboard in what will be the first attempt longer than seven furlongs for Cool Arrow.

Raising Rumors will travel to Oklahoma City from his Churchill Downs base in Louisville, Ky. for the Springboard Mile. Owned by Tom Durant of Grapevine, Texas and trained by Randy Morse, Raising Rumors was fifth in the Grade 3, $100,000 Bashford Manor Stakes at Churchill Downs in July. He then won the $65,000 Prairie Gold Juvenile at Prairie Meadows later that same month. Jockey C.J. McMahon will return to Remington Park to ride Raising Rumors in what will be the gelding’s initial attempt at more than seven furlongs.

C.R. Trout of Edmond, Okla. will send Hallelujah Hit into the Springboard off his score in the $75,000 Don McNeill Stakes at Remington Park on Nov. 18. Hallelujah Hit came from just off the pace in the one-mile race for Oklahoma-breds to win by one length. Alex Birzer was up for the win in the McNeill stakes and will keep the mount on Sunday.

Cool Arrow is the top earner in the Springboard Mile field with $102,835 bankrolled… U S Officer and Raising Rumors share the most wins of those entered with three each… The field of 12 for the Springboard is comprised of six Kentucky-breds (U S Officer, Totality, Young American, Prados Way, Equator and Cool Arrow); three Texas-breds (Imma Wild Bling, My Golden Aura and Raising Rumors); two Oklahoma-breds (Hallelujah Hit and Rowdy The Warrior); and one Maryland-bred (Cu Rahy).

A total of 141 horses entered the 12-race Springboard Mile program this Sunday for an average field size of 11.75 per race. There are two races with nine runners; one race with 11 (Useeit Stakes); seven races with 12 entries; and two races with 14 entered.