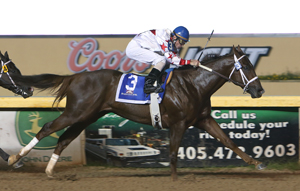 The Remington Park 2-year-old triple of stakes events is now underway as the $75,000 Kip Deville Stakes began the three-race series with The Drifter pulling away to victory by 1 1/4 lengths on Friday night.

Owned by Charles Fletcher of Heath, Texas, and trained by Cody Autrey, The Drifter grabbed the lead coming off the lone turn of the six-furlong race and drew clear late under Cliff Berry, finishing in 1:10.65 over the good track. Westernator charged down the lane for second with Estrickator holding third after dueling for the lead with the winner through the first half-mile.

Bred in Louisiana by Leonard Warf and Patricia Clark, The Drifter earned $45,000 for his Kip Deville effort to move his career money to $105,000. He is a gelding by Seeking a Home from the Cutlass Fax mare Lady Radkey.

The Drifter gave progeny of Texas stallions a sweep of the top three. His sire, Seeking a Home, stands at Paul Jordan’s Rolling Oaks Farm in Gonzales, Texas, while Westernator and Estrickator are both by Intimidator, who stands at Asmussen Horse Center in Laredo, Texas.