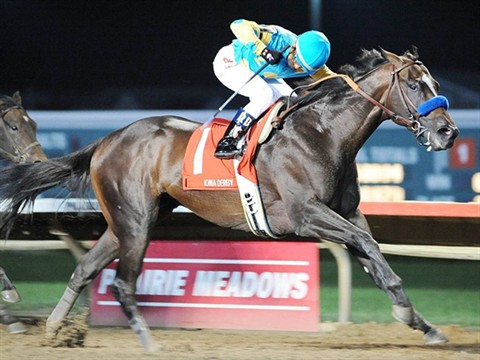 R Star Stallions has announced that Prayer for Relief, a multiple graded stakes winner of more than $2.2 million, will stand the 2018 season at the Anderson, Indiana, farm for the 2018 breeding season. He will stand for a fee of $3,000.

Prayer for Relief broke his maiden as a 2-year-old and placed in the Real Quiet Stakes at Hollywood Park before emerging as one of the nation’s top 3-year-olds with three consecutive graded stakes victories in the Grade 3 Iowa Derby, Grade 2 West Virginia Derby and Grade 2 Super Derby.

The son of Jump Start out of a multiple stakes-winning and stakes-producing mare then went on to a long and productive career as a top handicap horse while racing almost exclusively in graded stakes company. All told, he won six stakes and placed in 15 others—nearly all of them graded—including the Grade 1 Woodward Stakes, Grade 2 Suburban Stakes and Grade 2 Strub Stakes, along with a victory in the Grade 3 Prairie Meadows Cornhusker. He made his final start in the 2017 Pegasus World Cup Invitational (G1) as a 9-year-old with a career record of 46-8-6-10 and earnings of $2,277,948.

“Very few horses in recent memory displayed the combination of durability, longevity and talent that Prayer for Relief did, so we are so pleased to have him in Indiana,” said Leigh Ann Hopper, who with her husband, Kerry, operates R Star Stallions. “The quality of stallions in Indiana has been increasing every year as the Indiana program has grown, and we think Prayer for Relief helps continue that trend as one of the highest earners, if not the highest earner, to stand in the state.”

Prayer for Relief joins a roster at R Star Stallions that also includes Deputy Storm, Taprize and What Now.