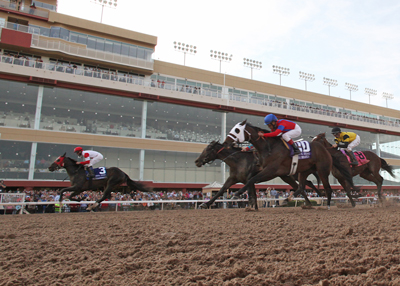 The $400,000 Oklahoma Derby was a wide-open affair at the top of the stretch run as six competitors were lined up from the rail out. The widest of the sextet prevailed as Politicallycorrect, despite drifting to the far outside of the stretch, won by three-quarters of a length under Hall of Fame jockey Kent Desormeaux.

Owned by Kenneth & Sarah Ramsey of Nicholasville, Ky. and trained by Wesley Ward, Politicallycorrect gives those connections their second win in the Oklahoma Derby in the last three years. They scored with Pleasant Prince in the 2010 race.

As the field of 10 made their way into the stretch, Desormeaux was able to move Politicallycorrect off the rail where he had been stalking the pace until the end of the final turn. Once in the clear, the gelding made up ground to join the chase for victory but didn’t take the straightest path to the finish.

“He gave me a great ride until I swung him out,” Desormeaux noted. “When I swung him out, he did explode and take off but he was drifting on me. When I tried to correct him, he slowed down so I didn’t do that again. As long as he was progressing and I felt like we were going to get him (Willy Beamin), I was just going to let him drift. I was thankful there was no one on the outside.”

Willy Beamin, winner of the Grade 1, $500,000 King’s Bishop at Saratoga in late August, took the lead inside the eighth pole but could not hold off the outside charge of Politicallycorrect, settling for second. Called To Serve, third in the Grade 2, $750,000 West Virginia Derby at Mountaineer in August, was just a head behind the runner-up in third.

The Remington Park main track was sloppy when racing started on Sunday but improved throughout the card to be fast by the Oklahoma Derby.

Bred in Kentucky by the Ramseys, Politicallycorrect is by Kitten’s Joy from the Tale of the Cat mare Exceedexpectations. The Oklahoma Derby was his third career win from a dozen starts and the first-place check of $240,000 moves his overall money to $351,375.

This was the first Oklahoma Derby win for Desormeaux in his first attempt here.

The Oklahoma Derby was supported by four other divisional stakes events on the biggest day of the Remington Park season. Only the derby and Remington Park Oaks had winners who scored by more than a head.

$250,000 Remington Park Oaks
The 3-year-old fillies took the main track three races prior to the Oklahoma Derby with a gate-to-wire victor in speedy Sticks Wondergirl taking the Oaks.

Owned by the Nicholasville, Ky. partnership of Alvin Haynes and Beth Burchell, Sticks Wondergirl was ridden by Jon Court, making every pole a winning one in the 1 1/16 miles event. Trained by Greg Burchell, Sticks Wondergirl set fractions of :23.58 for the quarter-mile; ;47.45 for the half-mile and 1:11.86 for six furlongs before finishing out in 1:44.05 over the muddy main track.

Beaten even-money favorite Jemima’s Pearl tried to reel in Sticks Wondergirl in the stretch but could only get within three-quarters of a length, settling for second. Yankee Union pressed the winner throughout the race before tiring in the final furlong for third.

Lightly raced, Sticks Wondergirl won her third race and first stakes, from just four starts. The Oaks was the third consecutive triumph for the daughter of Stevie Wonderboy, the 2005 Eclipse Award-winning 2-year-old, from the Quiet American mare Y Country. She earned $150,000 for the Oaks to bump her career money to $191,638.

$200,000 Remington Park Sprint Cup
In the most thrilling finish of the day, Alsvid won a microscopic photo-finish over Apprehender to win the Sprint Cup by a nose.

Owned by Black Hawk Stable of Elk City, Okla. and trained by Chris Hartman, Alsvid swept the big sprint races at Remington Park this season, adding the Sprint Cup to his score in the $100,000 David M. Vance Stakes in August. Regular rider Chris Landeros was up for the victory as the pair covered six furlongs in 1:09.46 over the good main track in race seven.

Alsvid took the lead in the Sprint Cup in the stretch and looked like he was going to draw clear. Apprehender had other ideas after pressing the pace until the stretch, he did not yield when the winner passed, digging in to battle to the finish.

A 3-year-old gelding by Officer from the Afternoon Deelites mare Reagle Mary, Alsvid won his third career Remington Park stakes race and his seventh race overall from 10 starts. His fourth overall win at Remington Park was worth $120,000 and moved his career earnings to $361,465.

Alsvid was bred in Kentucky by Yanagawa Stud.

$125,000 Remington Green Stakes
Due to over three days of rain in Oklahoma City, all of the derby day turf races were pulled from the turf course with the exception of two stakes events. The Green was run over good turf with Lockout just getting up over a Golden Yank in battle in the final strides.

Owned by Oklahoma Horse Racing Hall of Famer John Oxley of Tulsa, Okla. and trained by Mark Casse, Lockout was ridden by Jermaine Bridgmohan who made a triumphant return to Remington Park. Bridgmohan was the leading rider here in 2009 with 82 wins.

Lockout sat just off the pace set by Global Power then made his winning run in the lane. He hooked up with Golden Yank with less than a furlong to go then just edged the veteran 7-year-old by a head at the line, covering 1-1/16 miles over the sod in 1:42.21.

Bred in Kentucky by Columbiana Farm, Lockout is a 3-year-old colt by Limehouse from the Wild Deputy mare Non Sibi. The green represented his third career win from nine attempts and made another $75,000 to go into his lifetime bankroll of $258,527.

$50,000 Ladies on the Lawn
Oklahoma-bred fillies and mare competed in the over turf stakes on the card, going 7-1/2 furlongs. Skedee battled for the lead throughout the race in just her second start since last November then reached down for a courageous finish to just defeat the closing Oopsville Slew by a head.

Owned by the Ringwood, Okla. partnership of Robert Poteet and John & Mary Lowder, Skedee provided their connections with an emotional victory. Poteet, who co-bred Skedee with John Lowder, passed away earlier this week.

The Ladies on the Lawn was the eighth win from 28 career starts for Skedee, a 7-year-old mare by Sefapiano from the De Sarmiento mare Phuri Dai. Her seventh Remington Park win was worth $30,000 and jumped her lifetime money to $362,752.