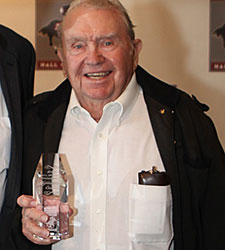 Gerald L. Dixon, a popular, if not iconic, Thoroughbred owner and breeder from Guymon, Oklahoma, passed away the evening of July 7, 2015. He is best known as the owner of 2012 Oklahoma Horse Racing Hall of Fame inductee, Highland Ice, a five-time Remington Park Champion and 1997 Horse of the Meet. Highland Ice won 16 of 48 races, including a record nine stakes wins at Remington Park.

Gerald Dixon, was a: jockey, farmer, land owner, mineral rights provocateur, poet and 2009 author of his memoirs titled, “80 Years of Memories in No Man’s Land.”  At age 75, Dixon took great pride in being licensed as a hotwalker for his Oklahoma-bred Highland Ice. He would report to the stable area at Remington Park on the mornings when he would visit Highland Ice to bring him carrots and walk him under the barn shedrow.

Dixon fell in love with horse racing due to his family’s involvement and referred to himself as “a small time jockey who had big time fun.” Known for his perpetual smile and keen memory, he maintained tremendous pride in his hardscrabble Western Oklahoma roots, saying “Hard times opened doors for me.” Up to his death at age 92, Gerald would drive himself from Guymon to the horse races in Oklahoma City.

Dixon’s wife Vonda preceded him in death in 1994 and he is survived by his son Jerry Dixon and daughter Rae Jean Humble who reside in Guymon, Oklahoma. Services are planned for 2 pm, Saturday, July 11th at Grace Southern Baptist Church in Guymon, Oklahoma. More info at www.bunchroberts.com.