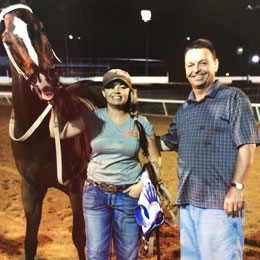 On this past Friday night, Fair Meadows in Tulsa, Oklahoma, saw 27-year-old Tara Sanders, who is the daughter of 1995All American Futurity-winning trainer Gregg Sanders, begin her own training career in dramatic fashion.

The younger Sanders sent out her very first starter as a trainer with the 5-year-old Thoroughbred mare Just Ours in a $10,000 claiming event. At odds of 9/2 with jockey Sasha Risenhoover, Just Ours broke alertly, set the pace, entered the stretch with a five length lead and hit the wire in front of the rest of the field to give Sanders her first win as a trainer in her first attempt.

“It was just a surreal feeling,” said Sanders. “I am a big believer in doing the impossible, but I could have never imagined that it could have played out for me to send out my very first horse as trainer and for it to win. It is just very surreal.”

With the excitement of the victory setting in after winner’s circle photos were taken, it was time for Sanders to make her way back to the barn area to prepare for her second career starter. It was in the 11th race of on the same card at Fair Meadows in a 250-yard Quarter Horse claiming race with her trainee Tempestinateapot.

As the gates opened, jockey Tony Bennett broke alertly aboard the 4-year-old Furyofthewind filly to take command of the short sprint and to finish driving to the wire in front to give the Oklahoma-native her second career victory.

“To have imagined I would win both of those races that night was just amazing,” said Sanders. “I just can’t be happier with how it turned out and so happy with all the people that believed in me. Racing horses is just where I belong, and I just love leading a horse over to the paddock to race. To be able to win with both a Thoroughbred and a Quarter Horse was also a high point as well. I am hoping I can attract some owners to put faith in me to train their horses. But it was a very amazing and emotional night. I think I must have cried at last 50 times before the night was finished. It was just such a great way to begin my career as a trainer.”

Her father, Gregg, won the All American Futurity, Quarter Horse racing’s richest and most prestigious event, with Winalota Cash.