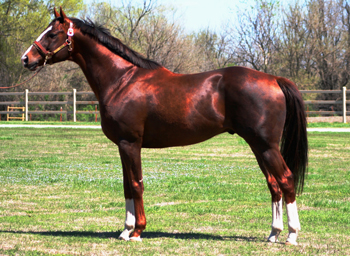 Freshman Oklahoma stallion Podium, a son of Pulpit who stands at Caines Stallion Station near Wynnewood, was represented by his first winner on September 11 as his daughter Party Cove captured a $34,300 maiden special weight contest at Remington Park.

Bred in Oklahoma by Bigheart Thoroughbreds and owned by Southern Okie Boys LLC, Party Cove nearly led from gate to wire and before crossing the finish line 1 ½ lengths in front with a time of 1:05.11 for 5 ½ furlongs. Bryan McNeil rode for trainer Roger Engel. Party Cove, who is out of the Baldski mare Dear Sweet, finished a close third in her racing debut and has now banked $23,877 in two starts.

Podium is an unraced son of successful sire of sires Pulpit out of a Storm Cat mare. Podium is a half brother to Grade 2 winner and leading Louisiana sire Half Ours, and his second dam is Grade 1 winner Key Phrase, who is the dam of another top Louisiana sire in Yankee Gentleman.

Podium stood the 2013 breeding season for a $1,000 fee as property of Bigheart Thoroughbreds and Scott L. Pierce. For more information, go to www.cainesstallionstation.com.