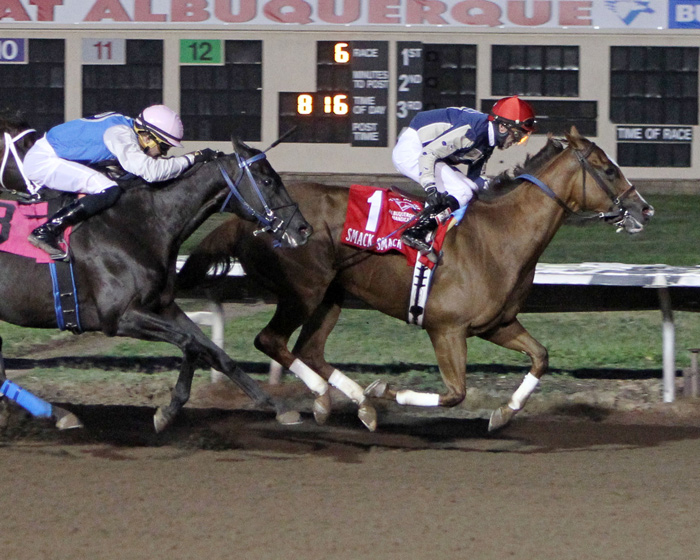 Although reigning Oklahoma Horse of the Year Shotgun Kowboy scratched from Saturday’s $175,000 Downs at Albuquerque Handicap in New Mexico, the race still had a strong Oklahoma flavor as Kentucky-bred Smack Smack scored for native Oklahoman and country music star Toby Keith in the name of his Dream Walkin Farms Inc. Smack Smack, a two-time stakes winner at Remington Park, is trained by longtime Oklahoma conditioner Don Von Hemel and was ridden by Shane Laviolette.

Smack Smack came from off the pace to score a neck victory over Shotgun Kowboy in the 1 1/8-mile, $300,000 Cornhusker Handicap (G3) at Prairie Meadows on July 2. Laviolette, who also rode the gelding in the Cornhusker, used different tactics on Saturday as he kept Smack Smack closer to the pace.

“I changed my strategy up a little when (Cornhusker runner-up Shotgun Kowboy) was scratched from this race because he’s a true early-speed horse,” Laviolette said. “I anticipated a couple of the others in this race might go early, but my horse broke so sharp that I thought that if they were going to let me go, I’d just try to keep the pace as slow as I could.

“This track has a long homestretch; it reminds me a little of Fair Grounds (in New Orleans) where I started,” the rider added. “I had to keep my horse close early to hold our position, but I had a lot of horse left in the stretch.”

A well-traveled sort, Smack Smack has raced at six tracks in five different states. The gelding has won 10 of 27 starts, including all three of his outs in New Mexico. Last year, Smack Smack won the Zia Park Championship and Veteran’s Stakes, both at Zia Park in Hobbs.