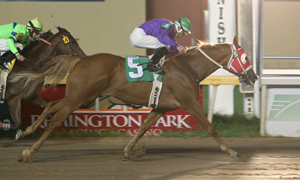 The Oklahoma Derby will headline a stout card of stakes races on Sunday, Sept. 30. Other big-money events include: the $250,000 Remington Park Oaks, the $200,000 Remington Park Sprint Cup, the $125,000 Remington Green Stakes and the $50,000 Ladies on the Lawn Stakes. Overall purse money for the derby day program will far exceed $1 million. The action is underway Sunday at 1:30pm Central.

Following are capsules for many horses expected to compete in the Oklahoma Derby on Sunday afternoon.

Called To Serve
Arrived via flight from California to Will Rogers World Airport and then to Remington Park this morning… Owned by Marc Ferrell and Vinka Ferrell, Called To Serve is trained by Peter Eurton and finished third in his most recent effort, the Grade 3, $750,000 West Virginia Derby at Mountaineer Park in August… Called To Serve has won two of his seven career starts with two third-place runs as well; he has earned $154,430… Ferrell will be seeking his second win in the Oklahoma Derby as his Fiddlers Afleet won in 2009… Called To Serve posted a bullet five-furlong work at Hollywood Park on Sunday, going in :59 4/5 seconds, the fastest of 127 at the distance that morning.

Daddy Nose Best
Arrived via flight from New York on Monday, he is one of at least two runners expected in the Oklahoma Derby from the barn of Steve Asmussen. The leading trainer at Remington Park this season, Asmussen has never won the Oklahoma Derby, one of the few stakes races locally from which he has not taken home a trophy… Daddy Nose Best won the Grade 3, $200,000 El Camino Real Derby in February followed by the Grade 3, $800,000 Sunland Park Derby in March. The colt by Scat Daddy from the Thunder Gulch mare Follow Your Bliss then finished 10th of 20 in the Kentucky Derby (G1) and was ninth of 11 in the Preakness Stakes (G1) before taking time off… In August, Daddy Nose Best was third in the Grade 2, $200,000 Hall of Fame Stakes at Saratoga… A winner of four of 14 career starts with two second-place finishes and a pair of thirds, Daddy Nose Best has earned $665,263… He is owned by Cathy and Bob Zollars of Dallas.

Diamond Joe
The pride of Nebraska, Diamond Joe continues to train forwardly for his Oklahoma Derby appearance. A winner of an allowance race at Remington Park on Sept. 14, he is one of just a few that are possible for the race that have won over the local main track… Trained by Chuck Turco, Diamond Joe is a gelding by Dazzling Falls, who won the Oklahoma Derby in 1995. Turco also trained Dazzling Falls… A winner of nine consecutive races, those victories have placed Diamond Joe atop the North American thoroughbred standings for most wins in 2012… Overall Diamond Joe has won 10 of 15 career starts with earnings of $126,116.

Master Rick
The colt returned to the Remington Park barn of trainer Steve Asmussen shortly after finishing third in the Grade 2, $500,000 Super Derby at Louisiana Downs on Sept. 8. He had been training here prior to his attempt in Bossier City… Posted a five-furlong breeze over the Remington Park surface on Monday, Sept. 24 in 1:02.26… Owned by Richard Davis of Dallas, Master Rick is seeking his first victory since scoring at Oaklawn Park in Hot Springs, Ark. when he won the $100,000 Northern Spur Stakes in April… Master Rick has two wins from 10 attempts and earnings of $154,943.

Politicallycorrect
Jumped on the plane with others coming in from New York on Monday when it stopped to pick him and other athletes up in Kentucky… Owned by Kenneth & Sarah Ramsey of Nicholasville, Ky. and trained by Wesley Ward, the connections seek their second Oklahoma Derby having won in 2010 with Pleasant Prince… A gelding by Kitten’s Joy, he finished second to Prospective in the Grade 3, $100,000 Ohio Derby at Thistledown in Cleveland in early July… Politicallycorrect has two wins from 11 attempts with total earnings of $111,375… He worked a bullet six furlongs at Remington Park on Tuesday morning in 1:12.59 handily.

Prospective
The colt owned by John Oxley of Tulsa, Okla. and trained by Mark Casse is anticipated to arrive in the Remington Park stable area on Wednesday after vanning to Oklahoma City from Kentucky… A winner of the Grade 3, $200,000 Grey Stakes at Woodbine in Toronto as a 2-year-old, Prospective then tried the Grade 1, $2,000,000 Breeders’ Cup Juvenile where he was 13th in the field of as many at Churchill Downs last November… As a 3-year-old he is well traveled with nice success including a win in the Grade 2, $350,000 Tampa Bay Derby. He was then sixth in the Grade 1, $750,000 Blue Grass Stakes at Keeneland in Lexington prior to an 18th-place finish in the Kentucky Derby… Rebounding in July, Prospective won the Grade 3, $100,000 Ohio Derby and was then eighth in the Grade 2, $600,000 Jim Dandy at Saratoga in upstate New York… He has won six of 12 lifetime with a pair of seconds and overall earnings of $604,235.

Speightscity
Trainer Gary Contessa sends a runner to the Oklahoma Derby for the second consecutive year after saddling Socialsaul here in 2011 to finish fourth behind Redeemed, Alternation and Prayer For Relief… Recently eighth of 11 in the Grade 1, $1,000,000 Travers Stakes at Saratoga, Speightscity made the mid-summer derby his return to action off a 6 1/2 month vacation. In early February he was second in the Grade 3, $200,000 Withers Stakes at Aqueduct… Speightscity competed in the 2011 Breeders’ Cup Juvenile (G1) at Churchill Downs, finishing ninth… By Speightstown from the Quiet American mare My American Girl, Speightscity arrived at Remington Park on the Monday flight and is scheduled to work over the track on Wednesday morning.

Ted’s Folly
The winner of the 2011 Springboard Mile at Remington Park, the connections of the Oklahoma-bred gelding are still aiming at the derby on Sunday… A winner of seven of 14 career attempts, Ted’s Folly is still an all or nothing runner, either winning the race or not finishing in the top three… Most recently he was fourth, beaten 4 3/4 lengths behind Diamond Joe in the allowance on Sept. 14 that served as a local prep for the Oklahoma Derby… Owned by Steve Martin of Morrison, Okla. and trained by Wilson Brown, Ted’s Folly has lifetime earnings of $375,082… The gelding by Wild Tale was Remington Park’s 2011 Horse of the Meeting by virtue of his six consecutive wins during the season.

Willy Beamin
Arrived on the flight from New York on Monday, Willy Beamin is set for his first start after winning two stakes races in just 72 hours on late August at Saratoga. He won the $150,000 Albany Stakes for New York-breds at 1 1/18 miles on Wed., Aug. 22 before rolling right back to win the Grade 1, $500,000 King’s Bishop Stakes at seven furlongs on Sat., Aug. 25… Extremely versatile and with plenty of endurance, Willy Beamin can battle from the front of a field or come closing down the stretch from the back of the pack… He has seven wins from 11 career starts with earnings of $609,405.