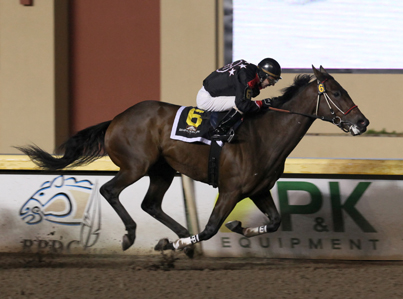 Imahit, winner of the 2013 Oklahoma Classics Cup, put in his first workout in nearly five months on Tuesday morning. The 5-year-old Oklahoma-bred had the fastest drill at three furlongs, moving handily in :35.41 seconds under jockey Jareth Loveberry.

Bred, owned and trained by C.R. Trout of Edmond, Okla., Imahit continues to build up to his first racing attempt since late January at Oaklawn Park in Hot Springs, Ark. “He just went great,” Trout said. “He galloped out strong, going a half-mile in 47-seconds.”

The three-furlong work by Imahit was the tops of 17 at the distance this morning.

Trout is looking forward to Imahit’s return as the gelding by Whywhywhy from the Sahm mare Halo Hit has finished out of the money in only two career attempts at Remington Park. “He had a foot ailment at Oaklawn and we had to back off of him, turning him out at home for some rest. We’ve pointed to this Remington season for his return, hoping to get an allowance race for him before aiming for stakes again.”

In addition to his stakes triumph last fall against Oklahoma-breds, Imahit won an open company allowance event going one mile on the final weekend of the Remington Park season in 2013. He also finished second behind Stachys in another open allowance race here in November, finishing one spot ahead of Moonshine Mullin who won the Grade 1 Stephen Foster Handicap at Churchill Downs earlier this summer.

Imahit has won six of 17 attempts overall with three seconds and a pair of thirds and seems to prefer longer events at two-turns with only four sprint starts on his resume. He has career earnings of $283,795 approaching the beginning of the Remington Park season.

Annually one of the leading trainers at Remington Park, Trout is primed with another group of young athletes that have given him high aspirations. “I have some nice 2-year-olds and am really looking forward to this season. The 2-year-old racing is going to be as good as it’s ever been here and we’re going to have a lot of fun.”

Live racing returns to Remington Park on Friday, Aug. 15 and Saturday, Aug. 16. The initial stakes races of the season take place on opening Saturday with the $175,000 Governor’s Cup at 1-1/8 for 3-year-olds and up and the $75,000 David M. Vance Sprint at six furlongs, also for 3-year-olds and up. The first race nightly is at 7pm.